It’s been a while since I ranted, but rest assured I’m still as crankypants as ever.

Recently I’ve been checking my head a lot and having what the self-helpies call “breakthroughs” or what stoners might call “Like, wow, man”. It all started with a trip to Hawai’i. Boy did I need a vacation at that point. Now, my life’s been a whole lot more chill since I dumped the rat race (and by the way, happy second second birthday to me!) so I was just busy, not the teeth-jangling stressed I used to be. But nevertheless, I’m a busy bee, so I was, well, busy.

First couple of days in Hawai’i were tough. No, wait, bear with me.

We were on Kauai, at the very north end, near the terminus of the only road in the area, which pretty much ended in a cliff. This is a rural, fairly isolated area. The road washes out periodically. There are only a handful of locals, some taro farmers, and a few mainland escapees who probably don’t want to be found. Plus Pierce Brosnan, so the locals said. 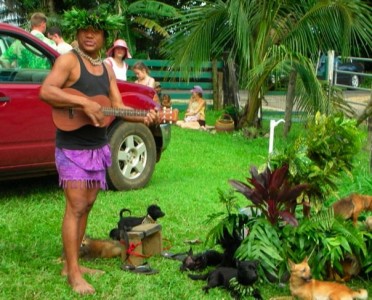 Oh, and this guy, who walked around the local town with about 9 tiny dogs dressed in grass skirts.

Anyway, there’s nothing to do there except sit on the empty beach. Great, in theory.

But for the first couple of days, I couldn’t hack it. I had to be, I felt, doing something. I had to be productive.

The funny thing about places like Kauai, where Nature is large and in charge, is that modern conveniences are present but feel largely irrelevant and idiotic. I had internet but Facebook seemed even more pointless and stupid than ever, although I half-heartedly uploaded a few photos. I tried watching TV a couple of evenings while flash rainstorms lashed the cottage, but in the context of such dramatically diva-esque Ma Nature, its tinny banality was intolerable.

One is, in short, forced to confront the reality of one’s existence. And slow the fuck down.

I adjusted. In the mornings I got up and sat on a log for half an hour to watch the sun come up as I drank Kona. At night I sat in a lawnchair and watched the glittering stars appear. I got acquainted with the kind of patient do-nothingness that shapes the lives of people who are truly content.

I walked the abandoned beach barefoot, foraging coconuts, which I then smashed open on rocks, in true Paleo style. 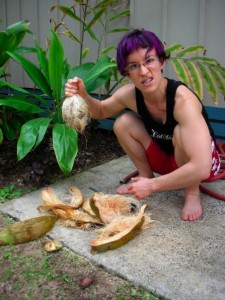 Behold! I have slain the mighty coconut with my pointed stick and smashy rock! Also notice my squat depth! And scary mean face!

I had forgotten how to do nothing.

This might seem silly, but ask yourself: How often are you simply alone with yourself? No TeeVee, no interwebs, no music, no distractions? Simply present with yourself? Aware?

For some people, such a reality is simply too distressing to contemplate, and thus they self-medicate with food, addictive behaviours, and other distractions or emotional anesthetics. And busy-ness.

Which brings me to the subject of expectations.

I’m in the business of expectations these days as a nutrition and fitness coach. People come to me expecting that I will help them get in shape and feel better. And I do.

But what is interesting is how people conceptualize this project, and the expectations they have for themselves.

For one thing, it seems like everyone can quantify their expectations.

They also know the time frame in which this will occur. 4 weeks. 8 weeks. 12 weeks. It’s almost always “weeks”, not “months” or “years” or “I don’t know; I assume time will unfold as it should”. Sometimes it is days or even hours: “I weighed myself tonight and I was 1 lb heavier than this morning! Am I broken?” (No, you just ate food.)

Yet folks do not seem to have clear expectations of how they will accomplish this magical number, nor what they need to confront in themselves in order to do so. They rarely expect life’s obstacles, which are generally quite expectable considering that most of them happen to us with striking regularity: kids, job, commute, weather, having PMS, and so forth. Nor do they expect their own habits, most of which happen every single day. They’re probably not even sure what to expect once they have achieved this special number.

They do not expect, in other words, reality.

Perhaps more distressing is that folks are marinating in expectations of another sort. These expectations are almost always imaginary but no less real. These are the dreaded “shoulds”.

Ask yourself if this sounds familiar.

Ask yourself: Do I even know what the hell “OK” looks like? Or am I drowing in fear, worry, anxiety, and “shoulds”?

I look around me now and see a lot of women who are driven as hell. They don’t know where they are going exactly, because the destination is largely fictitious. They are out of fuel and running on fumes; their bodies are crying out in distress with adrenal dysfunction, chronic fatigue, disordered eating, and stress-related illnesses. Nevertheless they are determined to white-knuckle the steering wheel of that bus right over the cliff.

If they’re fit women they have a very clear idea of how they should look, and most of them don’t look like that. They probably look like lovely, normal women but that ain’t good enough. I heard an elite athlete recently say that she had always hated her legs. Her legs were stupendous. Her quads could crush carbon into diamonds. But her legs did not look like some imaginary starved sylph, so in her mind they were a testament to failure.

All or nothing, baby! If it’s not Scottish, it’s crap!

The expectations of “fitness” are more insidious than the simple expectation to be skinny. Being skinny is pretty straightforward. You’re just skinny. End of story.

But with modern fitness-industrial culture, “fitness” is very, very complicated and specific. You can’t just enjoy “going outside for some fresh air” or “throwing a ball around”. You have to focus on body parts and stand on a vibration plate and “bring up your medial delts”.

Funny thing is, this world is mostly imaginary.

Yet it’s not as if you’re surrounded by the Next Stage in Evolution — you’re probably surrounded by normal, statistically likely out of shape people, so frankly, even engaging in regular activity of any kind already puts you ahead of the pack.

Have you ever noticed that images of commercial fitness models rarely look all that fun? And how many of them seem to be shot in skeezy hotel rooms? Or how often a “come hither” pout strays into “I’m feeling constipated” in the visual lexicon? 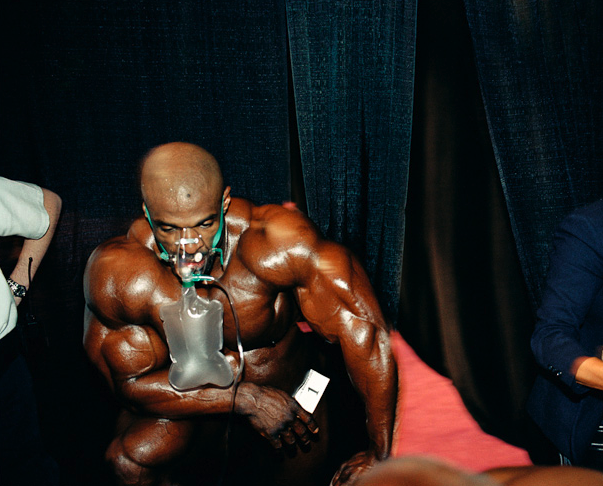 Bodybuilder Ronnie Coleman is given oxygen backstage during final judging rounds at the Mr. Olympia, to combat the effects of severe dieting and dehydration. Photo by Zed Nelson from the Love Me series (www.zednelson.com).

Is that what you want? Is that your dream?

Purposeless self-punishment is not productive discipline any more than self-flagellation and shame brings you closer to God.

A narcissistic, self-focused you. Yeah, beating yourself up is still pretty self-centred, even if it gets disguised as a public service.

What do they think of ME? What if someone sees ME like this? What should I be doing? I am so bad! I hate ME! Me, me, me!

Pull your head out of your ass and get over yourself. So let’s say you get those abs or that bench press. Let’s say that magical number appears. Then what?

Are you going to be happier than some nutty guy with a ukelele and 9 small dogs in grass skirts? Ask the Magic 8 Ball… signs point to “no”.

Let’s say you don’t measure up. Then what?

Someone who may be paying attention (probably not) may be slightly disappointed for a microsecond. There may be mild inconvenience. Or not. Probably not. Ouch! Your abundant and highly specific self-loathing didn’t change the universe! That hurts!

The sun still came up regardless of whether you made partner at 35… and if you allow yourself to do so, why not sit on a log with a nice warm mug and simply enjoy a moment with the real you?

How to get off the hamster wheel? Why, the Fuck It Way, of course!

There are two ways to get rich: