Actually it was my first second birthday. One year since I quit my job.

I came up with the concept of a “second birthday” after a friend of mine made a major, life-changing transition that ultimately left her much happier than before. The second birthday is the day you’re reborn. You decide when that will be. It’s your birthday, after all.

Now, most life transitions don’t happen in a single exciting day. Often they sneak up on us, and we suddenly realize that in some way, we’re six months better than we were before.

But sometimes, there is a brief period of time during which we decide no more or I’m going to try that. And we take some big step that ultimately leads us down a path we never could have anticipated. Looking back, we realize that at that moment the universe kicked us in the ass. We’ve ended up as new people.

The idea of rebirth and renewal is as old as the seasons. (As Monty Python explained in Monty Python and the Holy Grail, “Autumn changed into winter… winter changed into spring… spring changed back into autumn and autumn gave winter and spring a miss and went straight on into summer.”)

Culturally, we mark some life passages but not others. As the etiquette doyennes advised, “A lady should not appear in the newspaper except on three occasions: when she’s born, when she’s married, and when she dies.” Running for world leader is obviously not part of this scenario. (On the other hand, perhaps following this advice would have prevented the human car crashes of Lindsay Lohan and Tara Reid.)

However, there isn’t yet a greeting card for things like:

I think this reflects some short-sightedness on behalf of Hallmark.

Life provides us with abundant opportunities for self-reinvention. How often have you caught yourself saying things like:

The way we describe ourselves determines our realities.

For one man, this happened when he lost his driver’s license. (And for that, the rest of the world was grateful.) Within the space of a few weeks, his body started to droop. He got a kind of glazed look on his face and sat depressed and sullen in his chair. Basically, he just stopped giving a shit about life in general.

For another woman, this happened when she fell down while skating. She wasn’t really hurt, but it scared her. She became fearful and apprehensive. She convinced herself she was frail. She could barely summon the courage to leave the house to get groceries.

Meanwhile, my octogenarian grandmother, she of the osteoporotic spine, dead husband, and atrocious childhood, defiantly hauls her spongy, crumbling bones out into the garden to tend her roses, or out into a Kenora winter for her daily walk. She likes to tell the story of how she met a bear on the road while walking with a baby carriage. (To be clear, dear reader, Grandma had the baby carriage, not the bear.) When I call her, she is sharp as a tack even though I have to yell a bit down the phone. No fucking way she is sitting around in God’s waiting room. She has shit to do!

In all cases, it’s evident that “old” isn’t about objective measurements of age or health. It’s about a conscious decision to define oneself in a particular way, which then changes one’s reality.

We’re symbolic beings. We think in ideas and metaphors. Ever been to another country and been baffled by their vernacular expressions? Lie in Russian and you’re “hanging noodles on your ears”. Irritate an Armenian and you’re “ironing their head”.

Remember that episode of Star Trek TNG where they went to the metaphor planet? People talked only in reference to folk stories and proverbs. It’d be like saying “Goldilocks’ porridge” instead of “just right”. If you didn’t know the stories you’d have no idea what the hell anyone was talking about.

If you did know the stories, your reality would be full of images and concepts that then affected how you thought about the world. You’d quite likely imagine noodle ears every time you thought someone was making a fib.

When we butt up against a reality that doesn’t match the one we’ve constructed for ourselves, we respond in a few ways.

We carry around a “toolbox” of ideas and images about ourselves. When we find a new situation, we pull out our tools, and see which ones we can use. And if all we have is a hammer, everything looks like a nail.

Don’t believe me? Try an experiment. For the next week, say to yourself, “I’m an athlete.” Imagine yourself to be in training for something. You are an athlete who must eat, train, and recover properly for your sport. Your body must be strong, fast, and powerful. It must be nourished. You are an athlete. Forget about whether you’re “really” that person. Just pretend. Call yourself an athlete and play dress-up for the world.

Guess what happens? Suddenly, your workouts become a lot more meaningful. You imagine yourself striding in front of a cheering crowd as you tramp down the street. You think twice about that chili dog. A lot of stuff changes — and all you did was change a few words in your brain.

When I was a kid, one of my chores was to clean up the kitchen after dinner. I always found unloading the dishwasher to be a drag. So I imagined that I was in a dishwasher-unloading competition. I imagined an arena full of people, gathered to watch mighty feats of dishwasher-clearing. I became preoccupied with different techniques — which one was faster? More efficient? Would I be speedier if I did things categorically (all spoons at once) or spatially (right to left? back to front?). Suddenly I got a real kick out of unloading the dishwasher. To this day, that image still pops into my mind.

Again, nothing changed, except the way I thought about myself. The dishwasher was still there, same as always, full of clean dishes awaiting attention.

My old coach used to have a great piece of advice before competitions. Two words: highlight reel. We were to imagine a “highlight reel” of some of the crazy shit we tried to pull off. We imagined that movie in our heads, with some wicked music, before we competed. Regardless of whether we won or lost, we’d put in a good show that would then make an awesome montage. Imagining how the movie of your life would look is another way to get “outside yourself”.

Which brings me back to the second birthday. The day I walked out of my job, then got on to a plane to compete at the NAGA Worlds, I decided I was different. Sure, some things were “really” different. For one thing, I was unemployed. But I could easily have gone back to find another job in the same domain. I decided that I was a new person, and that new person would not accept the old constraints.

Nothing changed. Except my mind.

I marked the calendar for April 4.

This year I celebrated the second birthday with a cake. I made a fuss over myself. I renewed my commitment to living differently.

Not long after, I did an interview with a website called LeavingAcademia.com.

Podcast #1: There are places that would walk over their own mother to hire you

Podcast #3: There is no provision in academia to care for or nurture the physical self.

If you read this site and think to yourself, “I could never do that”, ask yourself why.

Are you truly limited by physical reality? For example, if you don’t have any arms, you probably won’t be very good at pullups. I suspect, however, that applies to 0.001% of you. 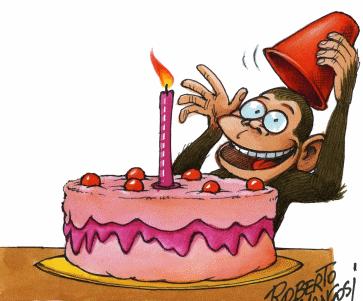 Or are you limited by your toolbox?

Ask yourself: What’s in my toolbox? Is it time to hit the mental Home Depot?

Ask yourself: What happens if today is different?

And if today becomes different for you, think ahead a year from now. You will get cake.

A recent article in the New Scientist examines what’s known as the “nocebo” effect — where a sham therapy makes things worse. It’s the opposite of the placebo effect, wherein a pretend medication or therapy makes things better. In both cases, people believe that something will occur, so it does.

Take Sam Shoeman, who was diagnosed with end-stage liver cancer in the 1970s and given just months to live. Shoeman duly died in the allotted time frame — yet the autopsy revealed that his doctors had got it wrong. The tumour was tiny and had not spread. “He didn’t die from cancer, but from believing he was dying of cancer,” says Meador. “If everyone treats you as if you are dying, you buy into it. Everything in your whole being becomes about dying”… In clinical trials, around a quarter of patients in control groups — those given supposedly inert therapies — experience negative side effects. The severity of these side effects sometimes matches those associated with real drugs…

The ultimate cause of the nocebo effect, however, is not neurochemistry but belief. According to Hahn, surgeons are often wary of operating on people who think they will die — because such patients often do. And the mere belief that one is susceptible to a heart attack is itself a risk factor. One study found that women who believed they are particularly prone to heart attack are nearly four times as likely to die from coronary conditions than other women with the same risk factors.

Despite the growing evidence that the nocebo effect is all too real, it is hard in this rational age to accept that people’s beliefs can kill them. After all, most of us would laugh if a strangely attired man leapt about waving a bone and told us we were going to die. But imagine how you would feel if you were told the same thing by a smartly dressed doctor with a wallful of medical degrees and a computerful of your scans and test results…

Depressed after splitting up with his girlfriend, Derek Adams took all his pills, then regretted it. Fearing he might die, he asked a neighbour to take him to hospital, where he collapsed. Shaky, pale and drowsy, his blood pressure dropped and his breaths came quickly.

Yet lab tests and toxicology screening came back clear. Over the next 4 hours Adams received 6 litres of saline, but improved little.

Then a doctor arrived from the clinical trial of an antidepressant in which Adams had been taking part. Adams had enrolled in the study about a month earlier. Initially he had felt his mood buoyed, but an argument with his ex-girlfriend saw him swallow the 29 remaining tablets.

The doctor revealed that Adams was in the control group. The pills he had “overdosed” on were harmless. Hearing this, Adams was surprised and tearfully relieved. Within 15 minutes he was fully alert, and his blood pressure and heart rate had returned to normal.