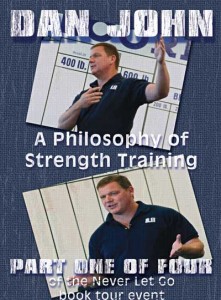 Part 1: A Philosophy of Strength Training

I’m not a huge Christmas fan. I score much farther along the “naughty” than “nice” continuum, and I deliberately opt out of the retail madness that characterizes North American commercial culture from late October to early January.

Thus, imagine my surprise when a few days before Christmas 2009, Santa visited me anyway. (Perhaps an administrative error at the North Pole. There are a lot of details to coordinate, after all.)

Yes, Santa visited in the form of a nice uniformed man (potentially a wise man; no evidence to confirm or deny) bearing a wondrous gift: four (!!) Dan John DVDs.

Joy to my world!

Now, regular readers will know how I feel about Dan. (See my review of his recent book, Never Let Go, here.)

Dan, to give you some context, is the Strength Coach and Head Track and Field Coach at Juan Diego Catholic High School in Draper, Utah and contributing writer to Men’s Health. He’s won the Master Pleasanton Highland Games twice, American Masters Discus Championships several times, the National Masters Weightlifitng Championship once and holds the American Record in the Weight Pentathlon. (He also does a bunch of other amazing stuff, by the way, which you can see by reading his full bio.)

And he’s one of my heroes.

I’ve been a huge fan of his since I painstakingly printed out his early Get Up newsletters many years ago.

These articles hold up well even many years later, when the Internet crawls with self-proclaimed gurus and experts. Everywhere you look, someone is selling you the Great Fat Dissolving Solution or How To Add 200 lbs To Yer Bench Press.

Much of it is crap or simply a cursory treatment of the subject. Frequently, the person writing it has never trained a single client.

But Dan has seen hundreds — possibly thousands — of trainees over his decades of training, trainees who range from “picked last in gym class” to elite athletes. He knows what works – what really works.

And, like me, he doesn’t make people do stuff that he hasn’t tried himself. He is his own best guinea pig who’s kept gym journals dating back to 1971. Much respect. 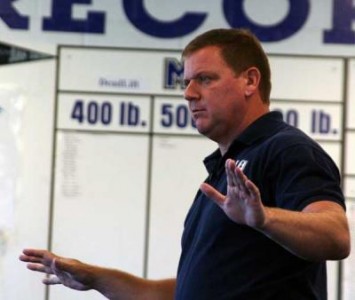 Dan blesses us all with his Sermon of Squat.

Getting these DVDs gave me a good excuse to screw up my courage and call the great man himself. Here’s a half-hour chat between Dan and I, in which we cover:

Aside from that burlesque/wrestling show I once went to, in which two tiny Mexican wrestlers — one dressed as a clown, the other as Darth Vader — chased a burlesque dancer dressed as a pinata, my conversation with Dan ranks as one of the greatest moments of my life. (I edited out the first fifteen minutes of me screaming like an 11-year-old girl at a Jonas Brothers concert.)

Back to the DVDs. You can see samples here.

Let me put this clearly: If you are interested in strength training, and you can only afford to buy four DVDs, buy these. If you never own or view any other DVD, you will pretty much have everything you need in these four items. (They’re also available individually, of course, by following the links above.)

They aren’t fancy videos. No star wipes, fitness models with pneumatic breasts, or multiple cuts per minute. Neither Guy Ritchie nor James Cameron was involved.

You’re getting Dan in his natural habitat — the gym — teaching average folks how to squat, press, swing, do Olympic lifts, and more. Cinematically this is meat and potatoes.

But meat and potatoes is what Dan does best. (His tagline: “I said it was simple. Not easy.”)

Each minute of these videos is packed full of wonderful tips, tricks, and insight. For example:

In the world of slick yet content-free fitness video production these DVDs stand out as a breath of fresh air and the voice of reason, just like Dan himself.