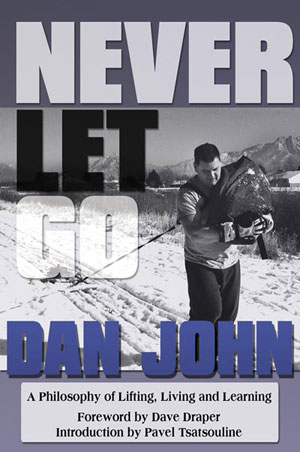 To every teacher who’s demotivated a student, every anal-retentive bodybuilder-by-numbers who worries about fluffing up their “upper biceps”, every gym salesperson personal trainer who can’t teach the foundational lifts, every sports science egghead who can’t apply their own concepts to make people actually better, and every sucky coach who can play well but can’t communicate the basic skills that athletes need, I say: Follow the gospel of Dan John and learn ye the error of your ways.

Dan John is like that mysterious guy at the bus station who appears one night when you’re drunk and high and just recently dumped by your longterm partner and considering a cheap trip to anywhere. He fades out of the fog at you like some kind of strongman wraith and dispenses plainspoken homilies that you didn’t even know you needed. When he says them, you’re all like, “Where the hell have you been all my life and why was I wasting my existence until this moment on Muscle and Fitness back issues?”

It’s like he can reach inside your brain and with a thumb and forefinger that can crush coal into diamonds (but is usually reserved for crushing cans of beer) he extracts the essential truth of humanity, as experienced via a hundred-rep squat set.  Then he hoists a caber, winks, and stomps away on tree-trunk legs.

You’re left with a size-12 thumbprint on your soul and a sudden desire to sober up, squat real deep, quit your job, and polish the iron in John’s Utah garage gym.

If Chuck Norris had a love child with a 32nd dimension spirit guide, it’d be Dan John.

Dan John is the real deal. He’s that guy you call when you need any kind of problem solved. He’s a shoot-from-the-hipper, a straight-talking Everyman who has peered into the abyss and casually crushed out his cigarette on the face of existential dread like it ain’t no thang.

I started reading Never Let Go while sitting on a deck with a friend who was reading a newspaper. By the second page in, I was exclaiming, “Let me read you this funny bit!” By the fifteenth funny bit, I gave up on interruptions and just read it out loud for several hilarious pages. We followed Dan’s adventures through crappy workouts, the Velocity Diet, ridiculous contests of strength, and coming to terms with his belly devouring his belt. We plowed through programs to get strong, programs to get fast, programs that would probably, in the end, make me a better person for doing them as well as a better lifter.

Throughout it all, Dan’s honest, forthright voice shines through. He speaks simple truths in simple words, but as with many things in life, the simplest things are the most challenging — and the most life-changing. Be strong. Lift heavy. Lift real things. Train outside. Challenge yourself. Eat real food. Treat the weight with respect. And of course, when it counts, never let go.