This is probably the most common thing a coach hears from a new client:

I want to lose weight.

If they’re athletic, or understand the difference between muscle and fat, perhaps that client might say:

I want to get leaner.

Now, some folks like to say that any attempt at getting skinnier, smaller, and/or leaner is selling out — it shows that we’ve all been suckered by The Anti-Fat Conspiracy / Beauty Myth into shrinking and shaming our natural, beauteous, abundant, fleshy exuberance.

This argument forgets that almost nothing about our current environment is “natural”, so it’s very hard for our bodies to know what the hell “natural” is, never mind to find it effortlessly.

However, if we’d like to talk about what’s “natural”, here are some data about the Body Mass Index (BMI) from a few foraging (hunter-gatherer) and subsistence agriculture societies.

(Or, in the case of some groups, data from when they were living in hunter-gatherer groups, even if they aren’t any more.)

Of course, all organisms somehow modify their environment. “Natural” is an imaginary idea.

But we could factually say that humans spent most of their evolutionary history in conditions that are not the conditions most of us live in now. So these folks live as close to “natural” as one could realistically expect:

Guess what: People in these groups are, or were, relatively lean. Shocker.

How to understand BMI

For instance, among the !Kung, women have an average BMI of 19.1.

To put this in understandable terms, at a BMI of 19.1:

Now, I’m not saying this is good or bad. BMI is not a marker of health or anything other than just what weight someone is relative to their height.

I’m not saying everyone falls into this average. Humans are diverse, and even in a small group there is variation.

I’m just saying this is how it is, on average, in these groups, under these conditions.

If we’re making the argument that some bodies are more “natural” than others, we have to compare apples to apples.

And the apples tell us that under “natural” conditions with particular requirements and limitations, there is probably an optimal range of weight and body fat to have.

As I like to say, biology is all about sweet spots and trade-offs.

Everything is a compromise in biology. Every advantage has a corresponding downside.

However, there are better and worse solutions to problems. There are optimal ranges for everything.

If we think about body fat, and how it works, you can see the reasons why there might be an optimal range for it.

As a body tissue, fat cushions us.

So we need enough body fat to store energy and ensure the right chemical balance, but not so much that we’re slow and stiff, or that our chemistry is disrupted.

As with fat, weight and size has a sweet spot too.

So changing your body fat and weight is not selling out, or being a sucker for Big Diet. It may be a very logical and well-founded strategy for improving your health, physical function, longevity, mobility, and/or athletic performance.

Importantly: That optimal range does not involve looking like a magazine cover.

In fact, that magazine cover model may not be in their optimal range for function, performance, health… or sanity. 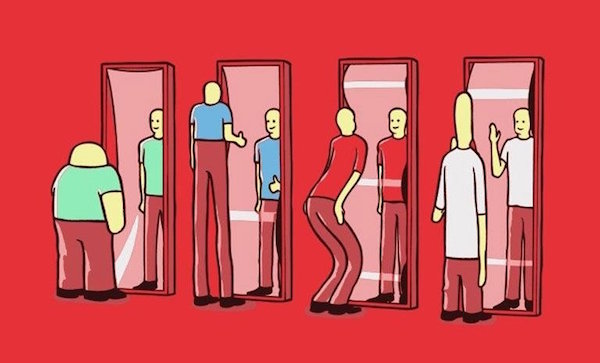 Unfortunately, data show that folks who might benefit the most from reducing their body fat a little bit often have the most unrealistic expectations.

In other words, if you walk into a weight-loss coaching scenario at 300 lb, you may want to be 120 lb of shredded steak, rather than, perhaps, a 250-lb person who feels much better.

So when you get to 250 lb (if you do, because you might even give up before that point), you’ll feel like a failure, because it’s not what you imagined.

The data also show that if excess fat tissue is causing mechanical or metabolic problems for you, you’ll probably feel and function better even if you only lose 5-10% of that weight.

You can also become a healthier person who weighs the same but changes their proportion of lean muscle tissue to body fat.

So if you start out as a 200 lb couch potato and, a few years later, win the heavyweight powerlifting championships one weekend plus the Clydesdale division of a 5K the weekend afterwards, you’ve probably dramatically improved the way you feel and function.

Here, I’m talking about what’s desirable for function, performance, and health, not desirable from a “hubba hubba” perspective.

As someone who’s been everything from very lean to very over-fat (and whose BMI currently hovers on the border of “overweight”), I can tell you that leanness ain’t all it’s cracked up to be… but carrying a lot of extra body fat doesn’t feel great either.

When I was too lean, my hormones went AWOL and I turned into a crazy, anxious no-period-having bitch.

When I was too over-fat, everything hurt and I felt shitty.

Now, hanging out on the border of “overweight”, I feel happy and healthy. Nobody wants to take my picture in a bikini. But I’m a whole lot less nuts, and my doctor is high-fiving me.

What this means for you

You never, ever have to get “ripped” to be healthy.

In fact, stop focusing so damn much on how you look. Look at your feelings and function.

What you DO have to do is what those foragers do.

If you do this consistently and well, then your body will very likely find its happy place — whatever that is.