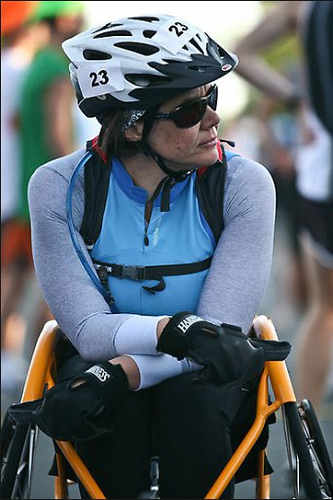 Katja runs the blog brokenclay.org. She’s 50 years old, and she’s had MS for 16 years. And she weight trains.

She’s lost (and maintained) a total of about 55 pounds to date (~15 more to go). She started doing athletic stuff about 5 years ago, and started lifting two years ago. She’s now handcycling, swimming and racing regularly. She did her first 10K as a wheelchair racer in May 2010 (in the Bolder Boulder, one of the biggest 10Ks on the continent — the wheelchair racing contingent was very intimidating, she says), and her first sprint triathlon in June.

As a child and young woman, I was pretty much full of self-loathing.

I was overweight (although not as overweight as I thought I was) from my early teenage years on. I worked hard to disassociate my body, my physical self, from my essential self.

My husband, on the other hand, defined himself almost exclusively as an athlete. He ran marathons and did triathlons, he watched what he ate, and he treated his body as a valuable resource that needed to be taken care of. Out of love for me, he begged me to start doing something, anything, physical, but I wasn’t buying it.

I was 34 years old, I had 3 young children (ages 8, 6 and 4) and I was in graduate school, working on my master’s degree in Computer Science. To top it off, at just about the same time, my father-in-law had a severe stroke resulting in a move for him into a nursing home, so the entire family was focused on dealing with that change.

At the beginning, I concentrated on not letting MS get in the way of anything else: “Oh, yes, I have MS, but look! Over there! A butterfly!”

And the early years of MS can be very deceptive—between attacks you may feel fine much of the time, which can lead to all sorts of mind games about whether you really have the disease or not. When I was having symptoms, I lied about it a lot: “I twisted my ankle,” or “I fell down the stairs.” The few times I tried to talk to anyone else about it were confusing and frustrating; I was all over the map about how I felt about it, and I’m sure I telegraphed my bewilderment to everyone else.

When I was diagnosed, the prevailing medical wisdom was that exertion was bad for people with MS.

There’s some basis in fact for this—people with MS, even if they are asymptomatic, generally fatigue more quickly than people without MS. For many people with MS, fatigue is a primary and very real symptom. Many people with MS are very sensitive to small rises in core body temperature; increased body temperature can cause an alarming (although temporary) increase in symptoms. My doctor at the time told me to rest as much as possible, and as a dedicated couch potato, I had no trouble following that advice.

I think it’s different for newly diagnosed MS patients now. When I was diagnosed, there were no disease modifying drugs (DMDs) in common use. Today neurologists try to get all patients started on treatment right away, and most of the current DMDs are injected. It’s hard to forget that you have a chronic neurological illness when you’re injecting yourself every day (or every other day, or every week). That’s got its drawbacks, too, of course.

After several years of “resting as much as possible” I was even more deconditioned than I had been before.

My weight had already ballooned with each pregnancy, and now I was well into “obese” territory. I can’t tell you whether my physical deterioration was due to MS, overweight, or lack of exercise, but I can’t believe that being overweight and sedentary helped.

And I was deteriorating, by fits and starts. Just after Christmas one year I was standing in the kitchen, and I turned to stir something on the stove, and I just slid to the floor. My husband and son had to pick me up and carry me to bed, and I couldn’t get up by myself for a couple of weeks. And I thought, “Someday someone is going to have to lift me in and out of bed every day, and weighing over 200 pounds isn’t going to make that any easier.”

So I lost weight. (Wow, doesn’t that sound easy?) It took two years, several nutritionists, and logging every bite I put in my mouth to lose 45 pounds. No exercise. But — with 20% of my body weight gone, I could walk around a block with a cane instead of crutches. My legs didn’t swell up by noon every day. Was it because I lost weight, or because my MS was remitting? Does it matter?

My MS progression didn’t stop, though. I was already using a wheelchair at work, and within the next couple of years I was using it almost full time. Using a wheelchair, even when I could still walk short distances, conserved my energy to do other things besides get from point A to point B.

About six years ago I bought a handcycle, which is an arm-powered tricycle with wheels. I didn’t have any training, or anyone to talk to—I just rode the handcycle a little further each time, when I could, and did the same in my wheelchair. I discovered that I was proud to push further today than I had pushed last week.

Now, even though I still can’t walk, I think of myself as an athlete, which is something I never thought I would be. I’m proud of my abilities, and I want to push to be able to do more.

Learning what I need 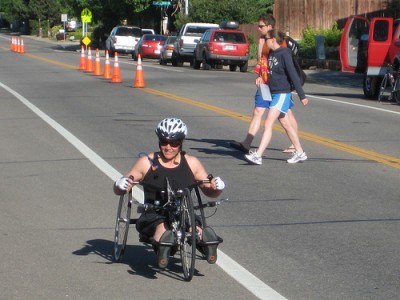 There’s really very little information in the way of scientific or clinical studies on the effects of exercise on people with MS. I decided to not worry about that, and go with how I felt.

When I started lifting weights, I would go home and go to bed for the rest of the day. It was months before I could both lift weights and do something else the same day (like get up for lunch). I decided that that was ok—that it was going to take me longer to adjust to lifting than it took able-bodied people, and I would just go with that.

Time and energy were both huge barriers, and I didn’t start working out effectively until I stopped working full time (I work three days a week). Even now, I don’t see how I could have done what I’m doing had I still been working full time; I just don’t have enough energy for both, thanks to MS. So switching to part time work means that I’m prioritizing my body, my health and my strength over money and the satisfaction I get from working. Not everyone can even afford to do that.

On a practical level, people with disabling chronic illnesses may need all kinds of support they may not have in order for exercise to be practical—mobility equipment, accessibility of facilities, transportation options, the acceptance and understanding of family and friends.

I wish I understood whatever switch flipped in my head to move me from all the reasons I believed I couldn’t work out to where I am now, but I don’t.

Now, I lift weights at a city gym with a trainer. When we started, my trainer didn’t particularly know anything about MS, but he’s willing to learn, and (luckily for me) he seems to have an innate understanding of how far I should push myself. He’s good at recognizing, even before I do, when I need to scale back or take it easy. He’s creative about adapting exercises to what I can do.

I use free weights almost exclusively. I don’t know how much of a badass I am at weights – I can bench press 70 pounds 20 times. I love lifting weights, hate to miss a session, and really like having muscles I can see :-).

I handcycle. I want to be able to tour, with able-bodied cyclists (i.e., my husband and friends), but the hard reality is that I’m never going to be able to go as fast as even the slow cyclists. Mentally, that’s difficult for me to accept.

I race. This is my first season wheelchair racing, and I really enjoy it. I need to get more mileage and more hills in, and enter more races. How badass am I? Well, out of 15 wheelchair racers in my first (and so far only) 10K, I came in last. But I was really pleased with my time. 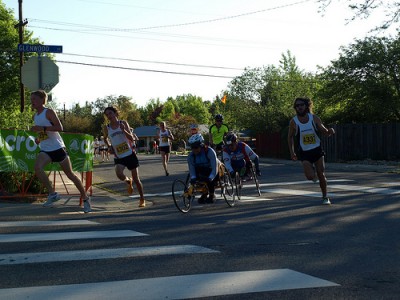 I swim. I started swimming last fall, and it’s one of the few sports where I actually can go as fast as (some) able-bodied people.

Participating in adaptive sports is interesting. There are so few of us, and our abilities and disabilities are so different, that it’s hard to figure out where you stand, badass-ness-wise. If you’re a 45 year old woman running 10Ks, you can find thousands of other people to compare yourself with. If you’re a 50 year old woman with MS doing 10Ks in a racing chair, actual competitors are few and far between.

But this same phenomenon works the other way, too — if you’re a 42 year old cyclist, you’re unlikely to find yourself in the same race (much less the same heat) as Lance Armstrong. But I’ve raced on the same track with Paralympic gold medalists (which is really daunting, by the way – talk about being dropped in a heartbeat!).

Really the only way to approach it (and stay sane) is to recognize that you’re competing with yourself, with your own previous performance.

I want to get better at racing and handcycling, and enter more races and triathlons.

What advice would I give to other folks learning to manage a chronic illness or disability?

Accept the fact that you may not be able to do whatever it is you want to do the same way you would have done it if you weren’t disabled, or if you didn’t have a chronic illness.

Once you’ve got the acceptance part down (and you’ll probably have to do that over and over again), find another way to do it!

Find the other people in your situation who are doing the things you want to do and learn from them.

The most pervasive myth was the one I bought into for so many years, that people with MS can’t (or shouldn’t) exercise. The dumbest things I heard, in fact, were the things I was telling myself—that there’s no way to do this, or that it’s unacceptable to compromise in order to do it. I’m still wrestling with the myth of independence and the belief that I should be able to do all this stuff without any assistance from others.

Once I started exercising, I experienced nothing but support and encouragement from the able-bodied (and otherwise) athletes around me. Sometimes this support can veer dangerously close to the “you’re so inspiring” trope, but even then, people’s hearts are in the right place.

I’m having a good time and I feel like a new person. Your website has helped validate my decisions to do this stuff. 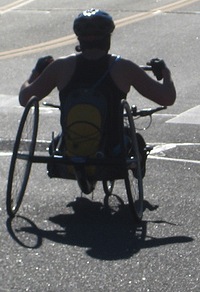