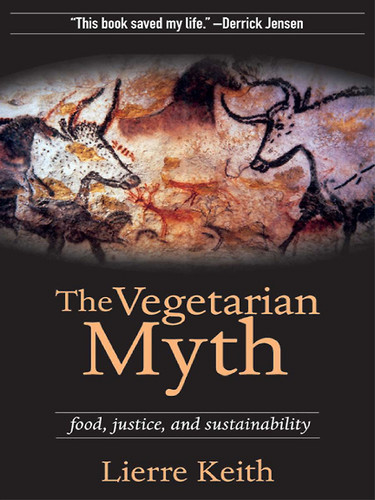 Also check out the interview/podcast I did with Lierre about her experiences on PrecisionNutrition.com!

Full disclosure: I am an omnivore.

Yet I am also an omnivore who struggles with the ethical questions of where food comes from and how it gets to me. I am a person who cares for others — both human and non-human — and a person who abhors oppression, violence (OK, at least the nonconsensual kind), and corporate degradation of our food quality and moral responsibilities (both to one another and to the living creatures we consume).

I am repulsed by the alienation that the industrial food production system has engendered. I am distressed that so many of my peers do not know what Brussels sprouts look like in the wild, or that they think meat comes in square packages.

And I am, quite frankly, pant-wettingly-scared about the ecological apocalypse that surely awaits us after pesticides, petroleum-based fertilizers, and the obliteration of biodiversity and natural life cycles via genetic modification of monoculture crops (including sterilized seeds) have had their way with the planet.

And yet, an omnivore I remain.

How, then, do I eat ethically?

Perhaps at no other time in history have we been so preoccupied with such questions of food ethics.

While various faiths have developed assorted food rules concerning preparation and consumption for thousands of years, most folks were nevertheless more concerned with the question of having enough to eat. The question of what to eat was generally secondary. And the question of why we eat was probably not on the table at all.

For the average person five hundred years ago, a loaf of bread, a jug of wine, and thou was pretty much as good as it got. Now here we are, munching our way into the 21st century, idly contemplating more existential questions as we stuff our gob.

For some people, such issues are not so idle. Rather, for conscious eaters, these questions strike at the heart of what it means to be an ethically acting individual. Or how to live in good health. Or how to care for the environment.

Lierre Keith has tackled all of these questions throughout her life. Like many people, she assumed that being vegan was a good way to implement her desire to care for her health, animals, and the environment. She diligently followed a vegan lifestyle for two decades.

Then, she writes, her body gave out. Wracked with pain from a degenerative spinal condition; with insulin whiplash; with depression and cognitive problems; and with plain old hunger — all of which, she says, were caused by twenty years of self-imposed malnutrtition in the name of ethical eating — she knew she had to change.

At first, she denied the evidence. Like Fox Mulder from the X-Files, she wanted to believe: that her choices were leading to a more just world, and a more sound body. Eventually, however, the cracks in this worldview turned into chasms.

Her epiphany came in two parts: an episode of somnambulist euphoria involving a dish of sour cream, and a desperate moment of shame and fear when a kindly Chinese medical doctor informed her with gentle sadness that she had no chi. Her life force, she writes, was ebbing away. (I actually cried while reading this part.)

And thus, also like many people (who are often less inclined to discuss the transition publicly), she began eating meat again. The decision resulted in a slow climb back to (partial) health,  but filled her with such angst that she set out on a quest to reconcile her new dietary choices with her worldview.

The result is a stunning, profound, beautiful book.

Keith’s writing is superb: clear, authentic, and honest. She builds her case with skillful prose and powerful vignettes that offer glimpses into her old and new lives. She hides little, it seems: we follow her digestive challenges, her bleak and bedridden depression, her existential struggles, and her adventures in chicken-raising.

Such vignettes, alternately heart-wrenching and hilarious (including a deeply funny attempt to release garden snails into the wild rather than harm them), are set against a backdrop of some of the liveliest science writing since Carl Sagan.

Readers with specialized formal expertise in biological sciences may take issue with the nuances of some of Keith’s data or scientific claims, but anyone with a scientific bent will appreciate Keith’s joy and wonderment at discovering the fascinating natural world. Her journey spans soil biology, microbiology, plant chemistry and communication, ecology, agricultural science, nutrition, physiology, neuroimmunology, and global political struggles.

Throughout these voyages, Keith develops her argument: that a plant-based monoculture of a handful of crops (e.g. wheat, soy, and corn) has actively harmed us, other living organisms, and the delicate balance of ecosystems. Such monocultures not only contravene the rules of biodiversity in the natural world, but also provide opportunities for corporate control of food systems.

Furthermore, evolutionarily speaking, these monocultures do not produce the foods that evolution intended us to eat. Emerging research indeed suggests that a grain-based diet does us few favours:

Moreover, soy has moved from an industrial waste product to an industrial waste product with a genius PR team. (For more on this, see Kaayla Daniel’s work and our interview with her in Vol 6 of Spezzatino magazine.) Plant-based eaters who consume soy as a “healthy” staple/meat alternative risk serious health consequences, especially when consuming soy in significant amounts (as with soy milk, tofurkey, and the like).

Thus, she argues, by embracing and promoting an entirely plant-based lifestyle, well-meaning vegetarians inadvertently (and ironically) create a situation that is unsustainable, unhealthy, inappropriate for local ecosystems (e.g. attempting to grow prairie crops in regions that are actually forests), dependent on petroleum-based fertilizers and large corporations, and above all, ignorant of how biological systems actually work.

But what of the question of harming animals? Nearly all right-thinking people will agree that factory farming is a scorched blight both on food quality and animal dignity. Very few would argue that such a system has actually made food better, though it has certainly succeeded in turning flesh into a more productive commodity.. It has not made us healthier, nor engaged us more intimately in caring for non-human species.

The industrial food system does not nourish our bodies, our souls, or the land. Quite the opposite: it has produced diseased, distressed animals and a big pile of crap — figuratively (in the form of processed garbage non-food) and literally (in the form of effluent caked on to confined beasts and sprayed into fields of sludge, there to contaminate groundwater and sear the ground beneath it).

Yet does this by extension suggest that eating animals is inherently wrong or immoral? Keith says no.

In an interesting intellectual approach, she does not argue that eating meat is more or less “right”, but rather that apprehending the natural world as a complex web of life and death — with death a necessity rather than an awkward, unmentionable, or avoidable outcome — reflects a grown-up view of reality that faces nature’s unpleasant truths head-on. Eventually we have to acknowledge that our goldfish is not sleeping and there is no Santa Claus.

Likewise we have to acknowledge that food is a complex cycle that does not begin with a grocery store. We may be saddened by this reality but it does not go away for wishing.

In addition, Keith points out, what of the non-cute and/or tiny creatures that we must harm in order to facilitate agriculture? We destroy billions of soil biota, insects, and small animals. We drive out birds, rodents, amphibians. We drain wetlands and raze forests. How many bugs equal a cow? How many mice equal an ear of corn?

While it does not form a significant part of the book, Keith points out the links between social oppression and our attitudes towards consumption. These links are not as facile or self-evident as one might think.

Often, a meat dish at a lefty potluck is as welcome as a turd in the punch bowl. I’ve often experienced disparaging comments about my food choices from well-meaning people (which, ironically, is the same thing that happens to vegetarians).

How could I tell such well-meaning folks that the experience of catching my own fish (with another, smaller, fish, as if I needed another reminder of everything being eaten), killing it myself, preparing it with care, and then eating it within a few hours filled me with a more profound sense of wonder and responsibility towards nature’s bounty than any trip to a crunchy health food store would ever accomplish?

I don’t need a course in environmentalism to appreciate the impact of my life choices on other creatures when I am directly involved in the food chain. I don’t need a course in anatomy to know that I should carefully save and cherish each part of this animal whose life I claimed. By implicating ourselves in this cycle, states Keith, we assume true responsibility for others and ourselves.

There is a proverb that says one does not become fat on food that one prays over. I choose to interpret this to mean that when we force ourselves to confront nature red in tooth and claw, to assume responsibility for our place in it, to experience wonderment at its miracles, and to share the harvest in a context of care and joy, we are wiser about what we consume.