For much of my life, I thought there was some good reason to keep up with certain kinds of things.

Maybe certain habits, or ways of being, or routines, or things that I’d invested time and energy into, or just got so accustomed to seeing that I couldn’t really imagine an alternative.

You know, the things where your brain is like We should dump this… but that being said, the folks are decent enough, and the location is good, and on Tuesdays there’s free coffee and cribbage in the rec room… and we’ve already waited ten minutes for this bus so what’s ten more minutes?

(Of course, all of the above are perfectly fine activities if they are working great for you — by some measurable, demonstrable, prove-able set of data such as having great bloodwork and not living your life in a body sling. If your numbers look good and you’re not wrecking yourself, then by all means keep doing your thing, and have fun!)

Sometimes I worried if I didn’t keep up with certain kinds of shit, at some point that not-keeping-up-ness would come back to bite me.

Like, if I fully embraced the joy of flexible work then I wouldn’t be able to hack it in the “real world” of office cubicles any more. (Which is ridiculous if you think about it, because almost nothing is less of a “real world” situation than an office job.)

Like, if I changed my physical activities, what if some situation in the future suddenly required me to use that previous physical activity, and then I wouldn’t have it?

As if I’m James Bond and random shit like that often happens — Oh, you have to fall out of a helicopter and ski down a mountain now! Too bad you didn’t keep up those gymnastics and ski lessons!

These are the things we tell ourselves so that we stay in jobs we hate. Or in universities, studying a subject that bores us. Or in relationships that suck.

(Like the older presumably married couple I saw the other day, who made five cell phone calls each while sitting at dinner with one another, simply to avoid the horror of the long-despised spousal company. The calls were alternated with staring off into space, likely contemplating Sartre’s maxim that “Hell is other people“.)

Or even, less dramatically, doing stuff that doesn’t actively bring us joy or give us energy. Doing stuff because we feel like we should. Because everyone else is saying how awesome it is.

So you say excuses and let inertia take its course.

As I aged, and worked with real clients in real life, and did my own thing, and had various life lessons shoved into existential orifices (because life lessons so rarely arrive politely and wait their turn and then absorb gently and nicely), I kinda stopped giving fucks.

I stopped giving fucks about “doing the right thing” or whether there was even a “right thing” at all.

Because there probably isn’t a “right thing” most of the time.

(Besides “Don’t be a dick” and “Say please and thank you” and “Don’t pee on the toilet seat” and stuff like that.)

Please stop telling me about your right things that you have just discovered.

I don’t give a fuck about diet cults.

(Yes, there’s an excellent chance your diet is culty. Ask an oldster whether we have always been at war with Eastasia and legumes.)

I don’t give a fuck about PRs, or what squat style you use, or whether you think knee wraps are Satan’s bandaids.

I don’t give a fuck about what you ate for any meal, ever, and I certainly don’t want to see a photo of it, unless you’re my awesome food photographer buddy Jason Grenci who can make hummus — YES EVEN HUMMUS — look so sexy you’d kick a naked Ryan Gosling in the fucking face on the way to eat that hummus.

I don’t give a fuck about your muffin top, or your cellulite, or most importantly your treatment of the matter like some kind of Spanish Flabquisition.

Oh most glorious masters of the Church of the Holy Narcissism, I confess to my sins of hoarding adipocytes, skipping Pilates class, and enjoying Scotchy Scotch Scotch Häagen Dazs!

Most of all I am ashamed to be a normal humanperson! Now I must share that shame with you and 3 million of my closest internet friends!

Because truly, unless there is some very pressing and important reason to know or do a particular thing in a particular way (like maybe you are actually James Bond and it would be good to know how to fall out of a helicopter properly)…

…almost none of it really matters.

There are almost no “rules”.

You have nothing to “prove”.

Do what is meaningful and fun and life-expanding and energy-giving to YOU.

Do what you love. And what loves you back. 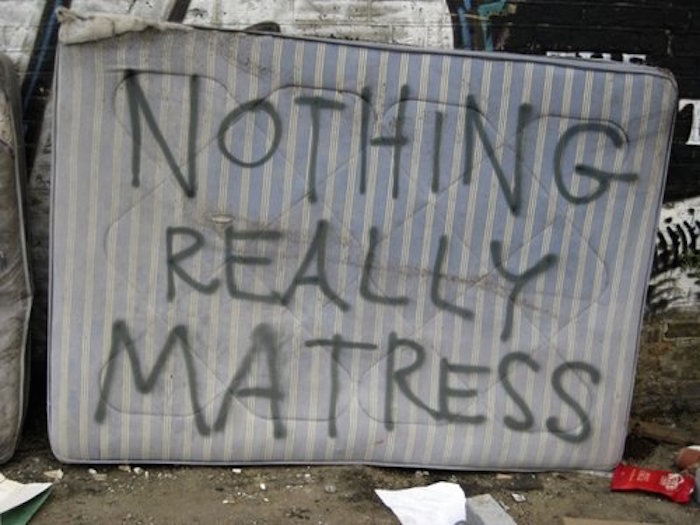 If I were to sit you down, like an elder and wiser auntie, and peer over my half-moon spectacles at you, and impart my genius via grizzled and jowly voicebox, I would say this:

Almost none of it really matters.

All those fitness and nutrition details you’re worrying about, OCDing about, posting on social media about, reading blogs about, arguing on the interwebs about, ruminating about?

It won’t make you happier.

It won’t make people love you. Or make you love yourself.

It won’t matter, if you’re consistent. Just keep showing up.

It won’t make you immortal or invincible or ageless or forever healthy or pain-free.

It won’t let you control an inherently uncontrollable existence.

It won’t let you ignore or hide from inconvenient realities. Such as loneliness. Fear. The void. Stubbing your toe.

It won’t make the universe your bitch.

Laws of existence, I don’t make ’em up.

Here’s what does matter:

People. Real people. People with whom you can have an I-Thou relationship. People you can really see, and touch, and listen to, and care about the silly thing that happened during their day today.

Service. What good have you put into the world today? How have you added value? Contributed to the greater good? Helped another person? (Or another living species?) Comforted someone, walked with them, bore witness to the ebb and flow of their existence?

Being “in” your life for every juicy moment. Not just the fun ones, which you probably aren’t truly enjoying anyway because you’re so busy trying to Instagram that shit. Check the fuck in. Slow the fuck down. Pay attention. Be in there. Settle your ass into a groove in the La-Z-Boy of life and enjoy the show, because it’s fucking awesome no matter what the channel is currently playing. The question of integrity is somewhat irrelevant when you are fully present and tuned in, because then there’s no other way to be. You cannot be fully, deeply present and also living inauthentically. The seat belt of your somatic reality will snag you.

Well, that’s pretty much it.

If you’re invested in the OCD tapdance right now, reading this might suck a bit.

Keep Sammy Davis Jr-ing with those fancy feet and c’mon back in a few years, when the wheel of life will inevitably have revealed that the cake is a lie.

If, however, you’re feeling more like you have nothing to lose but your chains, embrace some entropy.