Rant 54 December 2009: Haven’t been there/done that, have an opinion anyway 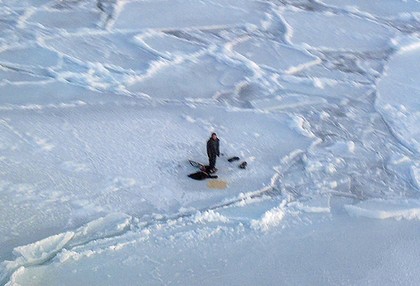 Recently, the front page of Canada’s national newspaper (no, not that squarehead harrumphing old regressive piece of crap National Post, the real one) carried a striking story.

An Inuit teenager in the Arctic had survived a frightening ordeal: He’d spent the night trapped on an ice floe with a polar bear and her cubs for companionship.

Here’s a long shot, in case you’d like a bit of context. Supposedly you can see the kid in here somewhere as a small speck in the upper middle, but I sure as heck can’t. (I thought I could, but then I realized it was a spot of balsamic vinegar I’d splotched on the screen from eating salad in front of the computer.) The rescuers must have had seriously good eyesight. 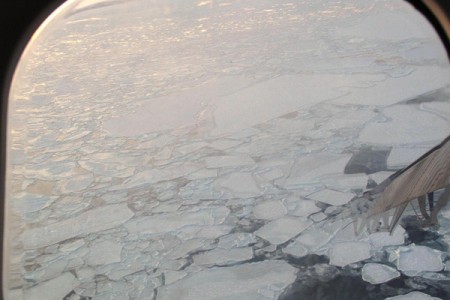 Now, for those of you living south of 60 degrees latitude (or not in Churchill, Manitoba), polar bears may look cute and friendly, like in the Coke commercials, but they most certainly are not. They are generally grumpy, hungry creatures who think people are basically upright cocktail weenies. If you think bears are cuddly pets, you’re probably the kind of person who would own a face-eating chimp. 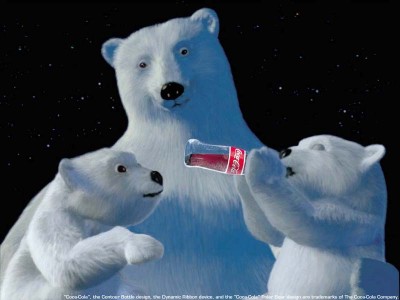 NOM NOM NOM man that Coke washes down the taste of human!!

Take “essentially pissy carnivore personality” and then add “protective mother” to the mix, stir well with “trapped on a tiny floating island of ice” and you have a pretty shitty situation. You’re a yummy seal-flavoured shwarma, thus:

To protect himself, the teenager shot the mother bear.

The day following the story, aggrieved letters to the editor poured in. What kind of heartless bastard would shoot a mother bear? Kids these days! Why was he out hunting in the first place?

Not surprisingly, 100% of these letters were from people who: 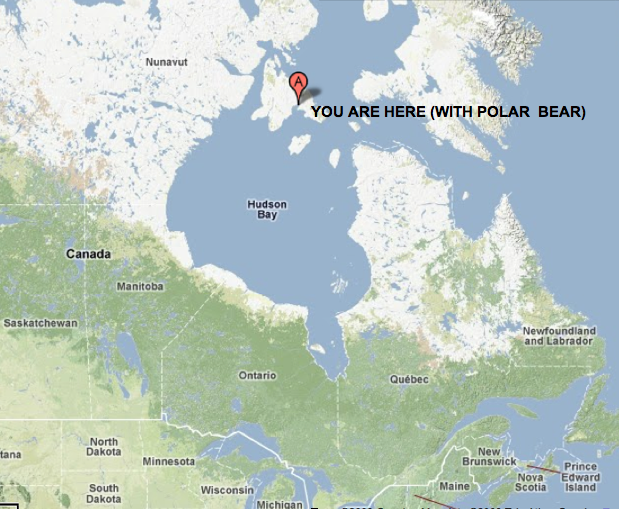 Now, this is not a rant about the ethics of hunting, or whether bears need killin’.

The point is this:

It’s really easy to have an opinion if you haven’t done something.

Especially if you haven’t done something difficult.

This story is a metaphor, so don’t waste my time with earnest comments about why people living in the toughest climate in the world should be eating soy burgers instead — I will delete such while whistling a jaunty tune, as evidence of the above point. (However, I welcome thoughts from anyone who has also shacked up with Ursus maritimus in Satan’s icebox.)

Armchair quarterbacks abound, especially in the fitness industry. And those armchairs are very comfortable.

Competing in a sport is fucking hard.

Squatting and deadlifting are fucking hard.

Olympic lifts are even fucking harder, especially when you fall on your ass doing them (like I did in front of an audience last month — cool instructor FAIL). (More on that adventure below.)

Getting out of bed and facing the world is fucking hard because right now, the world is not set up to enable your wellness, health, fitness, nor good nutrition.

Is this all worth doing? Absolutely.

Because here’s the thing:

Anything valuable is probably going to be fucking hard.

Parenthood. Getting an education. Growing up into a mature, emotionally successful human being. Not whipping out that awesome, soul-shredding comeback on your spouse and thus ruining 15 years of careful intimacy building. Etc.

Last month I helped out at an Olympic weightlifting workshop. I was supposedly one of the more “advanced” participants. Thus, I was called to demonstrate my snatch form.

(Yes, yes, “snatch form” is funny. Although I’ve been snickering more these days over “high crotch” in wrestling, probably mostly for the novelty since “snatch” has worn out its humour after a decade of OL training.)

So there I was, on the platform, onstage before a wide-eyed audience of beginners, demonstrating my mighty snatch.

I demonstrated each stage of the lift, step by step, slowly, pausing in key positions. Then it was time to put those pieces together and amaze the crowd with my speed and agility. Pull from the floor, hitch over the knees, slam into the hip drive, drop under majestically for the catch and whoops — miscalculate the bar speed, weight, and timing — aaaa FORE!!

Like Jonathan Livingston Seagull, the bar soared aloft in a sternwise direction before plummeting to earth with an earsplitting crash. Propelled by my athletic thrust (ha ha! thrust!), I promptly leaped away from it before falling explosively on to my ass with a thwomp.

A microsecond of silence. Horror. Screams from the crowd.

They were sure I’d dislocated my shoulder or driven my tailbone into my nostrils. Luckily, my shoulders are flexy and my bottom adequately padded. No such skeletal rearrangement had occurred.

A voice from the crowd: “We got that on video!” Sigh.

Another voice from the crowd, this one the reassuring baritone of Bang Fitness’ Geoff Girvitz.

“Oh yeah, if you’re going to learn the Olympic lifts, learn how to fail. You are going to drop the bar, so you’d better practice that now.”

(Shout out to Randy Hauer for teaching me this point a few years earlier. You saved me, buddy!)

I shrugged and got up. Picked up the bar.

“Let’s try that one again,” I said dryly. And I meant it. I should have been embarrassed, but oddly enough I wasn’t. Instead of thinking Oh my Gawd I totally bombed in front of a group I was thinking Bar’s lighter than I thought; slow down that second pull.

So I did. I tried it a few more times, in fact, just to be sure. By the third, slower rep, I was in the groove.

“There we go,” I said cheerfully. The crowd smiled hesitantly. (They still figured my shoulders should have exploded.) We chatted for a few minutes about how to jump away safely from a flying bar.

Afterwards, nobody said Boy are you a fuckup. They said Holy shit, you recovered like a champ. Geoff didn’t even make fun of me, which pretty much violates one of the key rules about Bang Fitness’ sense of humour: learning through loving mockery.

Nobody made fun of me, because they’d all been there. They’d all dropped bars, fallen down, hurt themselves, or otherwise screwed up in the gym.

(Subsequently, another “expert” demonstrator — competitive O-lifter Ron Dykstra — clipped his kneecaps with the clean. I felt a slight misery-loves-company warmth.)

Conversely, I hear from a lot of people about how we should be eating and exercising. And you know what? 99% of those people have never done those things they say I should do.

Lifetime-sedentary people tell me that I exercise “too much”. People who wouldn’t know an Olympic weightlifter from Tinkerbell tell me with great authority that deep squats “hurt your knees”. People with blood vessels full of liquidized chicken wings dispense dietary advice like they’re from the Harvard School of Public Health. Guys who’ve never stepped on a mat, never experienced the pant-wetting fear of having another massive human being smother and choke you with your own arm talk about how this or that UFC fighter is a bum/should have flying-armbarred that other guy.

Lots of you are probably getting such well-meaning advice.

My well-meaning advice to you? Ignore it, and seek out the people who have actually had to make the hard choices.

A lot of learning comes through painful experience, but this is necessary.

Even “experts” fuck up.

Get out there and do it anyway. (But have a good backup plan, just in case.)

People may judge your choices, but unless they’ve done that hard thing themselves, or have put in a LOT of evidence-based research concerning the subject, take their opinions with a grain of salt.

Joey: Wait a minute. I know you. You’re Kareem Abdul-Jabbar. You play basketball for the Los Angeles Lakers.
Roger Murdock: I’m sorry son, but you must have me confused with someone else. My name is Roger Murdock. I’m the co-pilot.
Joey: You are Kareem. I’ve seen you play. My dad’s got season tickets.
Roger Murdock: I think you should go back to your seat now Joey. Right Clarence?
Captain Oveur: Nahhhhhh, he’s not bothering anyone, let him stay here.
Roger Murdock: But just remember, my name is [showing his nametag] ROGER MURDOCK. I’m an airline pilot.
Joey: I think you’re the greatest, but my dad says you don’t work hard enough on defense.
[Kareem’s getting mad]
Joey: And he says that lots of times, you don’t even run down court. And that you don’t really try… except during the playoffs.
Roger Murdock: The hell I don’t!! Listen kid, I’ve been hearing that crap ever since I was at UCLA! I’m out there busting my buns every night! Tell your old man to drag Walton and Lanier up and down the court for 48 minutes!