Hey! Apparently there is this thing called swine flu! And we are all going to die horribly from it! Instead of the Four Horsemen, the apocalypse will be wrought upon us by the Four Pigmen, who will arrive in a burst of porcine glory astride their mighty oinking and snuffling steeds! 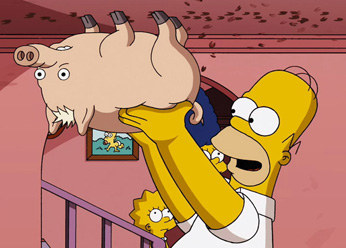 (Or, perhaps more apropos: “Spider Pig, Spider Pig, does whatever a Spider Pig does. Can he swing, from a web? No, he can’t — he’s a pig. Look out! Here comes the Spider Pig!”)

Recently an acquaintance of mine was interviewed about H1N1 for The National on CBC. She discussed protective measures with an anxious group of hockey parents: sanitize hockey gear, put water bottles in dishwasher, wrap their child in bubble wrap, etc.

(Amusing: One parent said “I never thought of sanitizing hockey gear before!” Seriously? Have you smelled that shit? I’d consider burning it after every practice.)

The solution, as to all of the world’s problems, is an aggressive application of slash-and-burn technology. After all, it worked great on that cockroach I smashed with a hammer. All we need is are nine billion more bigger, smashier, hammers. 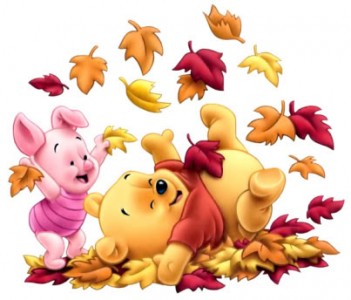 Pooh! Get away from that thing!

Manufacturers of disinfectants — which is to say, large corporations — cannot believe their luck. Executives are doing their happy dance in boardrooms over cases of cucumber-melon-scented alcohol-soaked Kleenex and spray cans of lemon-flavoured napalm. Or perhaps they have also fluffed up a few media stories about the benefits of Lysoling one’s surroundings.

Who’s to say what Big Sanitizer is capable of? Suck it, pathogens of the world! We’ll get you just like we fixed that damn morning sickness!

Dear readers, permit me an imaginative journey. Let us say that we travel with these anxious parents as they ferry their spawn home in gas-guzzling, pollution-spewing buggies.

Perhaps we’ll stop for a treat on the way! How about the drive thru!? YAY!!

Man, that hormone-injected, artificially flavoured, soy-additive/wheat-gluten-extended, meatlike patty on the sugared white-flour bun with red sugar sauce really hit the spot! Hand me some more of those trans-fat-dipped GM starch nuggets willya? Phew, salty… gotta wash it down with some sugar syrup and food colouring.

Pops’ll get a venti coffee too. Hell, with these kids, you need that 550 mg of caffeine. Sorry, lactose intolerant — can you throw some hexane-extracted soymilk in to that? Yeah, Silk, that’s cool — they’re some little hippie company right? And a flavour shot. Eh, gimme a couple. It’s a big coffee.

Oh yeah, Dylan’s been working out. Give him some blue Gatorade in the plastic bottle with extra bisphenol A. A thirteen-year-old boy shouldn’t be using his testicles anyway.

Faaack this traffic on the freeway is nuts. Hey! Nice turn signal, asshole! God DAMN IT lady hurry up! Shit, we’re going to be a while. Who can I call on my cell phone to distract myself? Man, my back is killing me. Must be all that sitting.

Gah! It’s totally hectic; let’s just do takeout. You guys want that deep dish cheese stuffed crust again? Yeah, that’s cool; mom can take her Alli when we eat (she’s looking stressed though; why not throw down an Effexor?).

Wash your hands, boys. Use that new antibacterial soap that causes birth defects.

And throw your hockey gear into the wash. Use that extra scented soap and fabric softener. Man, that stuff stinks. Spray some Febreze around. I’m gonna stick another Glade Plug-In into the outlet.

Don’t touch that delivery guy! He might be carrying something dangerous! 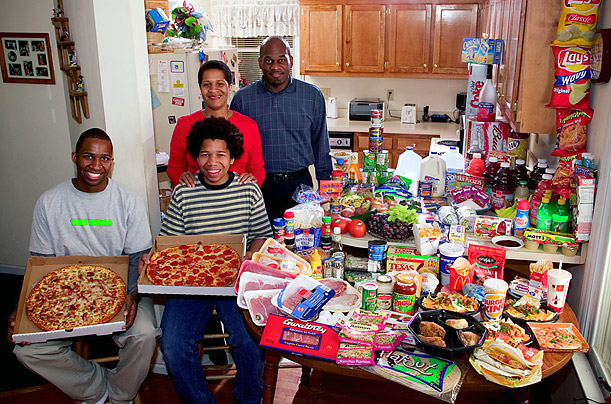 One American family's weekly food consumption. From What the World Eats