Things I learned on my summer vacation: Oxygen is important.

Most of the time I live close to sea level, swathed in a comfy blanket of lakeborne humidity and smog. It’s like being snuggled by a slightly smelly, just-out-of-the-water, gaseous walrus. But for my vacation I opted to leave behind creature comforts such as vaporized particulates and 21% oxygen to visit the Colorado mountains that South Park made famous.

As someone with lifelong allergies and a former asthmatic (yes, I truly was that kid with Coke-bottle glasses, braces, and asthma), breathing has rarely felt 100%. Although a Paleo-style diet that eliminates dairy and grains manages the sniffles nicely, I still travel with a tissue shoved in my pockets — as my long-suffering, wet-shredded-lint-accumulating washer can attest. Hayrides and cleaning dusty attics are not on my priority list. My fondness for spicy Korean and Szechuan cuisine generally results in some kind of inopportune sinus-clearing during the hot and sour soup course. I still avoid cats as if they were truly the demons our medieval forebears so feared. (Of course, the horrid beasts invariably target allergy sufferers, and make a point of spitefully coating us in fur and dander under the pretense of affection, leaving us watery-eyed and hivey.)

Nevertheless, I’ll run intervals or hit the boxing gym on a humid day like a champ. (A whiney champ, but a champ.) My lungs are like a beloved old Datsun: sure, they might need a kick-start or sound like a herd of cows being slowly sucked into a vacuum cleaner, but they work pretty well anyway.

Things change real fast when you stuff yourself into an aluminum tube, redolent with the combined musk of coffee, diesel, and farts, and spend a few hours at 30,000 feet. Things change even more when you land in the so-called Mile-High City, then proceed to the 8150 foot hamlet, before traipsing up the 10,350 mountain.

There is nary a drop of moisture to be found in this air. The mountains slice with surgical intensity into the brilliant blue sky. This is not the fuzzy, hazy, foggy, slightly sulfur-tinged land of my home, where visibility in July is commonly described in metres rather than miles — and not just because we’re metric Canadians.

Suddenly there is a rhino on my chest, stuffing hairballs into my trachea. My hands immediately turn into aged tissue paper. My nails crumble like yesterday’s sand castle. I run for the heavy-duty moisturizer, slathering myself with oily, gobby handfuls. I chug water like a frat boy guzzles beer from a plastic tube. I curse forgetting my bottle of fish oil.

Fun discovery! Did you know that small capillaries can pop at high altitudes like wee blood-filled balloons? And that those capillaries can be in in cool places like your eyeball? And then you can walk around looking like a stoned zombie? I bet you didn’t! 82% of Everest climbers experience eyeball explosions, aka high-altitude retinal hemorrhage, so I’m in good company. Lookit me, I’m cool like those crazy people who can’t leave a perfectly good death trap alone!

Wherever the so-called obesity epidemic is, I can tell you where it ain’t: Colorado. In fact, this state is so poor in adipose resources that it must import fat from elsewhere. (Luckily there is no shortage of lipid-blessed tourists from other, more sedentary and sugar-laced states selflessly helping to rectify this imbalance.)

Huffing up a mountain with my tiny, spoiled lungs on day 2, I was passed by a couple of upward-jogging grannies in sports bras, tan and lean as whippets, cheerfully toting water bottles. Then a woman on a bike. Then a few more bikes. Thankfully, after three hours of continuous gasping like a beached whale, I made it to the top before a small Colorado child humiliated me.

By day 5 I was feeling cocky, and tackled a steep trail down the mountain. About 100 steps into my descent, I was passed, again, by an outdoorsily beautiful woman running UP the trail like a Swedish milkmaid in an Adidas commercial. Which meant she had been running UP the trail for about 2100 feet of altitude and 5 k of distance already. She said “Hi,” pleasantly, as she passed. Yes, she had enough lung capacity to singsong a happy greeting rather than a sullen wheeze.

The shaming! It is abundant!

In the past I’ve been taken to task by aggrieved Yanks who claim I’m unfairly stereotyping their country’s atrocious grocery offerings. Well, 90% of food available in US grocery stores is still garbage that should not be consumed by anyone except perhaps an alien life form that lives on petroleum derivatives. But hats off to at least one US state — Colorado — for showing us all how to live. 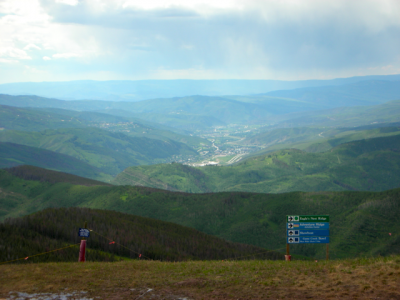 Hi there! Here are your trails, sorted alphabetically and by difficulty! Watch your step! Can I get you anything else? Would you like a hot towel?

In my travels through the northwest of CO, I discovered:

And guess what: everyone looks great. Most natives are a normal, healthy weight and appear capable of tackling a few flights of stairs, or even the occasional mountain. People are outside doing stuff, being active in their daily lives. Bike trailers are parked in front of the grocery store along with the cars, and then loaded with the products of regular errands.

In fact, at times I felt actively wussified in comparison, which is saying a lot.

But on the plus side, I imagined how much worse I’d have felt if I weren’t in shape.

And it struck me, about 2 hours in to my epic initial crawl up the mountain, during which my tummy growled and I briefly worried about not bringing anything to eat: This is what millions of years of evolution have prepared me for. Not to sit on my ass in front of a screen 10 inches from my eyes. Not to be stressed out constantly about stupid shit.

But rather, to live on nature’s scale of generational time and geologic time. Do the striated rocks give a rat’s ass if that deadline is met? No — they just keep layering their layers, one grain at a time. The seasons come and go. Wildflowers bloom and die. Fires go through and then things regrow. My body doesn’t need to be obsessively stuffed with food minute by minute; it could easily make it through a week of climbing with only a few gathered leaves in my belly. (Unpleasantly, but it could.) So it goes.

Nature’s visual scale is in miles. I should not be living my life close up. My poor aggrieved retina was meant to look into the far-off distance, and then slowly, consciously, approach my destination.

Tangential anecdote, which I think illustrates this divide: At the top of the mountain, like the Holy Grail, there is a BBQ restaurant. Brothers and sisters, I testify unto you: there is no more ecstatic discovery than fresh corn on the cob and smoked pork after 3 hours of vertical toil. As I sat gratefully gnawing on my cavewoman’s bounty* after my morning’s trudge, I overheard a conversation thus:

“Wow, you finished up that sandwich really fast!”

“That’s because I’m not checking my email, Dad.”

I turned to look in my polite, carefully discreet Canadian way. A father sat with his three teenaged boys. He was hunched over his iPhone, fixated on the tiny screen, fingers obsessively scrolling, tapping, poking at the electronic device, oblivious to the jaw-dropping natural beauty that surrounded us. E-Addict Dad continued:

“Didja know I get five bars up here? I checked it over there too. [here, he gestured to the scenic outlook deck perched atop the cliff with a stunning, existence-rattling view of nature’s geologic theatre] Five bars. Amazing.”

Yes, dear readers. This man was CHECKING HIS FUCKING EMAIL ON TOP OF A MOUNTAIN. Surrounded by the very best show that nature had to offer, along with his loving family and rapidly growing children who no doubt would have loved to feel some shred of affection from their emotionally distant parental unit, this asshat was reading his sports scores or checking his stocks or whatever pointless bullshit five bars afforded him. 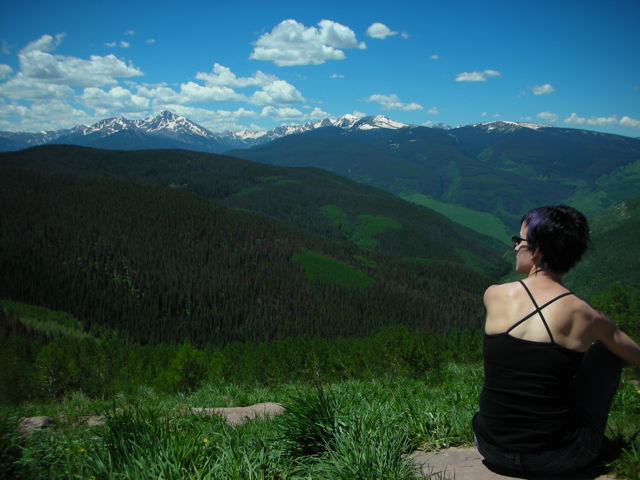 "You know what would really improve this? Being able to check my email. And maybe print a Q3 report. Yeah."

I digress. Return to my realization of approximately 1 hour prior to the encounter with Fucked-Up Priorities Man.

My body was handling its bidness perfectly well, despite the occasional eyeball detonation. At that very moment, my body was happily mobilizing stored fat to fuel me. My type I muscle fibres were managing the climb with ease, grateful for the opportunity to strut their stuff (literally).

See, here’s one of my definitions of fitness:

This is the point that is entirely lost on the modern fitness-industrial complex. Fitness has nothing to do with seeing your abs. It has nothing to do with stuffing yourself into a bikini. These types of things are decorative hobbies along the lines of building a ship in a bottle: amusing pastimes for those so inclined, but ultimately pointless.

Fitness makes your body do its job. And with some help from enlightened social infrastructure, we could all be those uber-woman grannies bouncing up the mountain. 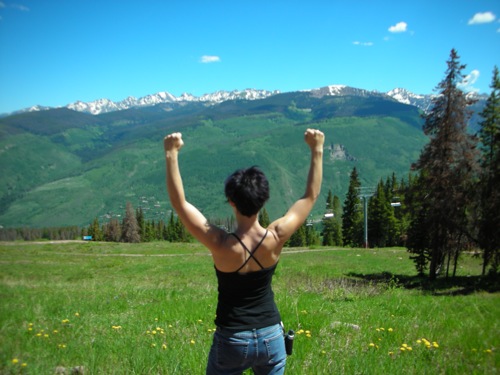 My Rocky pose after (barely) kicking that mountain's ass

*Yes, I know corn is technically a domesticated Neolithic byproduct. Don’t be a jagoff and mention it.