Sound familiar? Sure, of course.

If you’re into running and other endurance sports, you might even own one of those bandolier-style fuel belts, like this:

Well guess what: That’s probably BS, like 95% of the mainstream information about what counts as “good” nutrition and exercise.

The balance of fluid and electrolytes (dissolved mineral ions) in our bodies is critical to health and proper function.

Sodium is one of the most important ions in our bodies, and is critical for regulating things like blood pressure.

Hyponatremia is a condition of electrolyte imbalance, in which there is too little sodium relative to water. (Sodium has the chemical symbol “Na”, and “hypo” means “under”; hence “hyponatremia” = “too little sodium”.)

Hyponatremia is not widely known but it’s more common than people realize, and it can be deadly. Blood pressure and volume are thrown off. Cells in the brain swell with water but there is no place for the extra volume to go — your skull is a pretty tight helmet.

The result: Neurological symptoms ranging from mild (dizziness and disorientation) to severe (the brain centres that handle important stuff like breathing and heart rate shut down).

I mean c’mon, is anyone really surprised when someone who puts their body through a grueling physical challenge has a heart attack? It seems like a tragic but sensible explanation, especially in a culture where the bulk of the population (so to speak) is generally unaccustomed to tough physical labours.

This also holds for things like seizures, muscle cramping, fatigue, nausea, etc. Throwing up in the fourth hour of an Ironman just seems pretty normal. (Heck, I kind of want to upchuck just thinking about it.)

Thus, few medical personnel might think to look for hyponatremia as a root cause — yet fluid and electrolyte imbalance might be the most important factor. 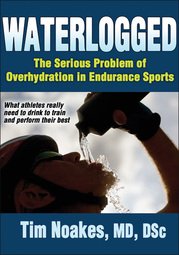 And of course we’re all supposed to stay hydrated right? So maybe if a runner comes to us with dizziness then we should give them more water, right?

So here’s the situation:

Too much water causes a dangerous imbalance, and there have been many cases in which athletes have even died from over-hydration.

Yet runners and other athletes are encouraged to drink more, more, more.

We’re all terrified of being dehydrated.

And we’re constantly told that we have to drink water and sports drinks to be “healthy”, to “lose fat”, and to achieve optimum performance.

In the last few decades, a “science of hydration” has sprung up around the sports drink industry, which is deeply invested in creating and promoting products.

This is the so-called “hydration industry”: the folks who convinced us that chugging Crayola-coloured chemical-tasting water is good for our health.

I had the pleasure of interviewing Dr. Noakes about his new book Waterlogged.

It was a deeply revealing interview, covering topics such as: