New Rules of Lifting for Women: Interview with Cassandra Forsythe 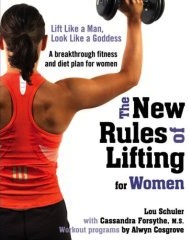 Lou Schuler, Cassandra Forsythe, and Alwyn Cosgrove. The New Rules of Lifting for Women: Lift Like a Man, Look Like a Goddess. Avery; 2007.

NROL is written by a kickass trifecta of three major names in the business.

Lou Schuler is a well-known fitness journalist who has written several books, including The New Rules of Lifting, The Book of Muscle, and The Home Workout Bible. He’s been a contributor to Men’s Fitness and Men’s Health, serving as the fitness director of the latter for several years.

Cassandra Forsythe is emerging as one of the most authoritative voices in women’s nutrition and training. She’s a Registered Dietitian who holds a PhD in Kinesiology, an MSc in Human Nutrition and Metabolism and a BSc in Nutrition and Food Science. Her main research interests are low-carbohydrate nutrition, dietary fatty acids, cardiovascular disease, diabetes, weight-loss, female-specific nutrition and training, and the female athlete triad. Her other book is Women’s Health Perfect Body Diet: The Ultimate Weight Loss and Workout Plan to Drop Stubborn Pounds and Get Fit for Life

(She’s also, by the way, pregnant. We explore her insights on being an unusual combination — a serious female athlete, Dr. Nutrition, and pregnant — in the podcast.)

Alwyn Cosgrove is one of the best-known strength coaches in the biz. He’s a former Taekwon-do international champion who now works as a strength and conditioning coach with a wide variety of clientele, including several Olympic and national level athletes, five World Champions and professionals in a multitude of sports including boxing, martial arts, soccer, ice skating, football, fencing, triathlon, rugby, bodybuilding, dance and fitness competition. 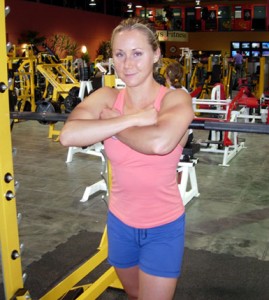 Cassandra and I get chatty with it for nearly an hour. Topics covered:

As Cassandra points out, it’s unusual to have a podcast with two women weight trainers chatting so honestly about the realities of training and bodily experiences.

But that’s just the kind of good stuff that Stumptuous.com is devoted to bringing to the people!

Listen online by clicking below:

Or download in MP3 format for good listenin’ on your iPod. (65 MB – yeah, it’s a biggie!) Right-click on the link, if you want to save to your hard drive first (recommended).

As I’ve mentioned, NROL is a super introduction to the field of women and weight training, and it’s solidly backed by coaching experience and scholarly evidence.

This would make a great gift for your mom, sister, girlfriend/wife, best friend, etc. — anyone who’s considering weight training but hesitant about whether women should do it.

It would also make a great gift for folks who may know their way around the gym a little, but want to become more grounded in some of the fundamental principles of program design and sports nutrition.

The first section of the book provides a primer on sex-based physiology, and why women and men should train the same: with relatively heavier weights, higher intensities, and more challenge overall.

The first section debunks common myths — most notably that women will “get too big” from weight training; that certain types of training can make muscles “longer”‘; and a key point: the myth that men’s and women’s muscles are substantially different.

The first section also explains much of the logic behind the training plans provided: the importance of progressive overload, which exercises to choose and why, and why not to waste your time with gender-specific “toning”. (It explains why kickbacks suck. Hooray!)

The second section provides nutrition basics such as how many calories active women need, why protein’s important, and how to supplement with post-workout recovery nutrition. It suggests meal plan and preparation techniques, and there’s no fancy weird stuff or secret/magical ingredients — just clear, basic ideas for organizing your nutrition.

The third section provides a step-by-step, carefully crafted workout program in great detail. If you follow the program closely (and you should, if you want to reap the benefits), it’ll take around 6 months to complete. The lifts are basic yet effective. There’s lots of variation to keep you learning and interested.

Total beginners might be slightly intimidated by the presence of complex exercises such as squats and deadlifts — but hey, they can just come here and get help figuring out the technique!

All in all, this is a super starter text for anyone interested in women’s weight training.