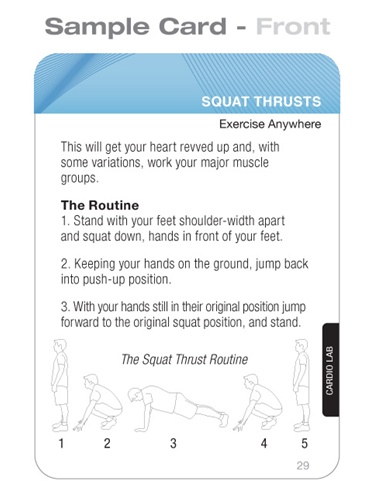 People often ask me about printing up my website pages so they can take them to the gym. It’s not a bad solution, and it beats hauling your laptop to the squat rack and asking the floor staff if you can set up a wireless router. But what if there were an easier way to quickly –and portably — reference exercise tips and pics?

Enter the NURU reference cards. These cards are aimed at “the man or woman who wants to look good and feel great without having to hit the local gym”. It’s a pack of cards with exercise pictures, descriptions, and workout instructions for low-tech exercises.

The first thing that appeals to me about these little doodads is the price. They’re cheap. For $10 you get a stack of 30 little cards that clip together like a keychain. You can stick them in your purse, pocket, or workout bag.

The second thing that appeals to me is their design. They’re well laid out, attractively presented, and manage to stuff a whole lot of great, useful information into a tiny package. Most cards have some kind of thoughtful illustration of muscles, exercises, or exercise concepts. There is a glossary of common exercise terms, and some guidance on staying motivated.

The cards cover the basics of strength training, with some surprisingly informed advice, such as an emphasis on interval training. This isn’t the usual dumbass muscle mag crap: they debunk myths about women getting too big, and spot reduction (I was disheartened to see, however, that they do reproduce the “only squat to parallel” myth but hey, it’s probably too much to hope for.) Muscle groups and their functions are depicted and described well. There are suggested variations for different ability levels.

I even found an idea for something I’d never seen before: using a towel wrapped around one’s foot for a resisted row. Clever! I also liked the table chin-up, which was something I’ve used with clients; nice to see that other people don’t find the notion totally insane.

There are also ideas for low-tech cardio — I was gratified to see that burpees made the list, horrid yet brilliant creatures that they are.

If you’re looking for a handy portable reference, I’d definitely recommend them.