Pursuant to my earlier post about the problems of food in the US, I came across this horrific little gem. The best thing about it was that it was advertised on the package (in two places on a small label) as a “healthy snack” with “wholesome ingredients”. 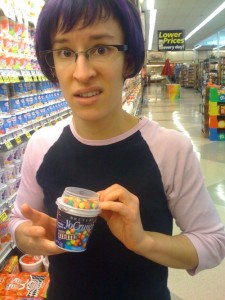 It’s a container of yogurt with M&Ms on the top, which you can then stir into the yogurt. Yes, apparently 27 toppings for ice cream sundaes is not enough — we must now have candy sprinkles on yogurt. Can sprinkles on burgers be far behind? Sprinkles on vegetables? I thought chocolate on spinach was the kind of joke food that Oscar the Grouch would have been into eating, but now, I suspect we’re about 5 years away from it. On the plus side, maybe they can slather the spinach with chemicals to combat the E.coli from unsupervised agri-conglomerate practices.

By the way, you can also get caramel Crunch and Oreo flavours. I chose the M&M version to document because I enjoyed the ingredient list that included ten distinct artificial colours.

The regulatory and institutional state of health and wellbeing in this country is kind of like that movie Speed, where the bus starts careening out of control at 90mph, except Sandra Bullock isn’t at the wheel, it’s actually a deranged rabid baboon on meth.

To cheer you up, here is a photo of me with Big John McCarthy, shot in the octagon at BJMUTA. I’m standing on my toes a bit, and he’s bending over a bit. I could barely get my arm all the way around his waist. He is, indeed, a large man. 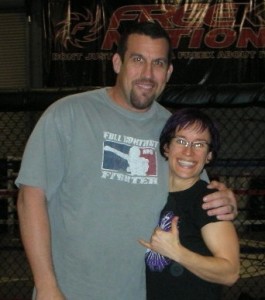