I’m a woman who has been lifting weights for years and loving it. A few years ago I started a strength blog, inspired by Stumptuous, called gubernatrix.co.uk.

The interactions I had on this blog over the years motivated me to do more to get women lifting heavy — to take action on the ground, so to speak. So I started a beginners’ weight training course in the UK, taught by women, for women.

The course is called Ladies Who Lift and does what it says on the tin: classes take place in the power racks (no plastic studio weights!).

I teach the “big” lifts of squat, deadlift and bench, emphasizing learning how to do this stuff yourself without relying on a trainer to set it all up for you and tell you what to do. The course took around a year to come to fruition, and has been a great success so far.

There was a fair amount of scepticism – even from myself – about whether women-only weight training courses would work. The concept seemed patronising, treating women as a special case, needing special treatment and extra help. Would there even be an audience for them beyond a handful of enthusiasts?

It’s similar to the argument you hear for women in the boardroom or in politics: Unless you’ve got the brass balls to march into that male-dominated environment and survive on your own, you have no business being there. 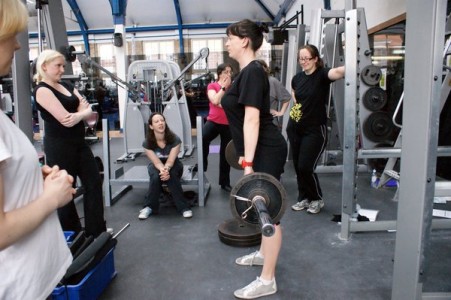 Well, I don’t buy that any more.

The truth is that men help each other in the gym all the time. Why shouldn’t women?

One of my earliest participants told me “I would never have been brave enough to try barbell lifts without this opportunity”.

Just because she isn’t Miss Super Confident Alpha Female doesn’t mean she won’t enjoy lifting and get plenty out of it, once she has been shown the basics and gained a bit of confidence. She’s already busted quite a few barriers by being interested in barbell lifting in the first place.

The other criticism I have heard is that it’s “less motivating” or “less challenging” to have a women-only class and even that it “holds women back”.

This merely reveals the common prejudice that women don’t work as hard as men, aren’t as good as men, and need to have men around in order to get pumped up and motivated. I haven’t found this to be true and I feel that I lift better when my female lifting buddies are around.

What really turned me around on the idea of women-only classes was running a couple of pilot workshops last year. It was immediately obvious that even just a couple of workshops can make a significant difference to one’s confidence, attitude and approach to weight training.

Why an all-female environment?

First, it’s a more comfortable learning environment for most women, not having members of the opposite sex around.

You lift with people of a similar size, strength level and body composition. It feels like there’s less to prove and you’re not being singled out for being different.

There’s also less temptation to fall back on the “I’m only a girl” defence, which is common in mixed groups. You are not being given an easier or lighter version of what everyone else is doing.

I have often been in mixed male/female workshops where some women use the presence of the men to hang back and participate less, or are quick to count themselves out of perceived “harder” exercises and leave them to the alpha males to show off.

An all-female environment is the most powerful counterpoint to the traditional male view of weight training. Even if you received exactly the same instruction in a mixed or mostly male group, the impact would not be the same as in a group that was solely women and being taught by a woman.

One of the problems I am told about most often through my blog is the lack of female role models in weight training. It is one of the reasons why Stumptuous has had such an enormous impact on women’s lifting – Krista was the first to get her head around this and publicly, globally provide a solution. I have met many women who started lifting because of this website!

A key message of my Ladies Who Lift course (as with Stumptuous also) is that, not only is weight training not a male preserve, but the knowledge does not have to be handed down by men either. 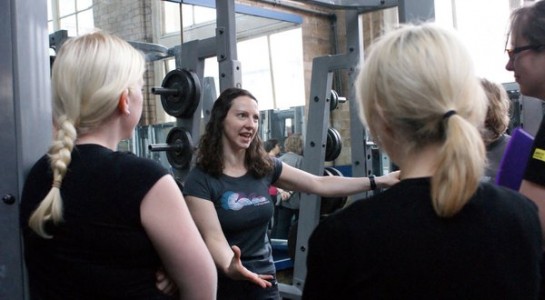 Women are not only capable of lifting weights, they are capable of being experts and teachers in weight training too. This is a really important message: it is not that we as women are being “let in” to a male world, it doesn’t have to be a male world at all!

Being told by a man that “women should train with weights” and “weights won’t make you big and bulky” is one thing. It’s helpful, but sometimes hard to believe. Being told the same thing by a woman who embodies these truths is much more powerful.

Wherever you go on to lift, having these influences early in your lifting career will have a greater impact.

Many of the women who do my Ladies Who Lift beginners’ course go on to join local lifting gyms and train alongside men. They can do this because they have the confidence that they know what they are doing and can hold their own, and they have a sense of what can be achieved by women too.

“The best part of this is that I have been able to train on my own and have a better sense of my personal progress.”
–LwL participant 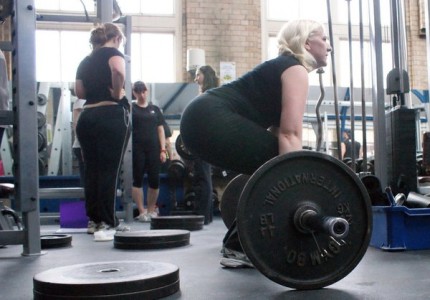 Women get told all kinds of crazy stuff by men in gyms who think they know better and think that by undermining what a woman is doing they can somehow appear more manly and authoritative. Stuff like “that weight is too heavy for you”, or “women should do light weights and high reps”.

But if you’ve just come from an environment where your female instructor was encouraging you to lift as heavy as you can, and your female training buddies were smashing heavy squats, it is easier to recognise these comments for the nonsense they are and to have the quiet confidence that what you are doing is ok.

Time and again I am told by participants, “I never thought I’d be able to lift as much as I have!” Expectations of female strength may be low among fitness professionals and society in general, but Ladies Who Lift graduates learn that it is perfectly normal for women to be able to lift weights equivalent to their own bodyweight in various ways and have fun doing it.

But of course, you knew that!

For more information on the Ladies Who Lift course, please visit WeAreLadiesWhoLift.com.