David Kessler, The End of Overeating 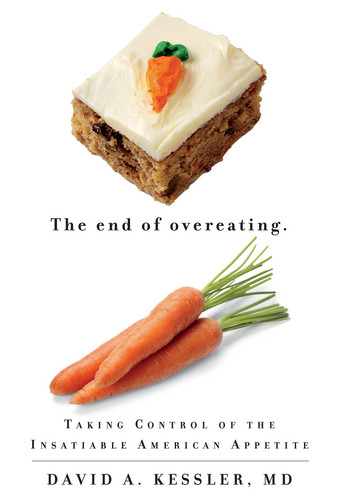 Put down the cookie and drop the donut. Hard, isn’t it?

This book is also for the rest of you (who possibly don’t exist) who don’t understand how people can do such silly things. You 1% who claim to be satisfied with a single square of chocolate, listen quietly without interruptions.

If you’re from, say, rural Asia or eastern Africa, walk around any mall in the United States and you’ll be flabbergasted at the flabbitude. It’s a situation unlike any other in human history: the widespread wide-load consequences of abundant overnutrition and sedentary living.

While traveling through the southern US and stopping at a Denny’s, I had the inspiration to make a movie called, simply, Eating. The movie would be a montage of mouths chewing and slurping the vast portions of sugar/fat/chemical-laced slurry that passes for comestibles in North America.

Not surprisingly, the top-selling drug classes in the US are drugs to treat the aftermath of overeating. #1 are gastro-esophageal reflux (GERD) medications, while #2 are statins, which purportedly lower cholesterol, which supposedly is good for us (let’s leave that discussion for another time).

It’s tempting to think that overeating and its symptomatic consequences — obesity, chronic diseases, etc. — represent a failure of individual will. We just eat too fucking much because, well, we are weak. A well-known bodybuilding writer once quipped that he was going to write a very simple diet book called Don’t Eat So Much, You Fat Fuck. (I assume this would go along with Saturday Night Live’s infomercial for a financial management strategy called Don’t Buy Stuff You Can’t Afford.)

But is it really that easy? Are we all just moral weaklings? Lazy? Stupid?

When I was fat, I certainly wasn’t. I tried hard to eat well and get regular activity. And I was in grad school, so my stupidity was debatable. (Probably a different, more masochistic, kind of stupidity. I digress.)

Now that I’m fit, my desire to eat delicious things — way past the point where I should quit — has not gone away. I’m just better at managing the insatiable reward system of the brain, and I avoid many of the foods that trigger the NOM NOM NOM response. But you know what? The Pepto Bismol is still in my medicine cabinet and I’d be lying if I said it was unopened.

So what’s up with the fill ‘er up?

In this insightful book, author David Kessler explores the mechanisms behind overeating. Why do we eat too much? Why do we eat things that we know we shouldn’t? Why do we eat well past the point of satiety — often well into the territory of pain?

Important systems in the brain and body control appetite (the desire to eat), hunger (the physical manifestation of needing food), and satiety (feelings of fullness and satisfaction). These systems have done us very well for millennia.

However, these systems evolved in conditions of food scarcity and irregularity. They evolved when food was high-fibre, often high-protein, and high in naturally occurring “good” fats. And they evolved in conditions where we might have to trek many, many miles to get that food. We evolved to run after beasts, to scoop fish from streams and oceans, to scrabble roots out of the soil, and to pluck tiny berries from bushes as we walked and walked and walked. Sweetness signaled “good to eat” and “fruit”. Salt came from the sea, or from the blood of animals freshly killed.

We did not, in other words, evolve to manage an overstimulating environment replete with artificial fats, mountains of sugar, constipatingly fibreless hunks of gluten, artificially generated scents that remind us of sizzling meat on a grill or fresh strawberries, nor a host of other chemicals that stimulate our reward pathways.

Our brain is wired for the savannah, but it’s getting Dairy Queen and corn dogs. Is it any wonder the poor dear is going haywire?

Kessler explores the ways in which the commercial food industry has manipulated the contents of prepared foods to ensure that these foods hit our “on” switch. There is more sugar. More fat. More salt. More perceived — but not always actual — flavour. All of these chemicals stimulate our brains’ reward systems.

This is not surprising. What is novel is the degree to which this manipulation occurs. Every last detail is considered: look, feel, texture, graininess or smoothness, the speed at which a food melts or crunches, the sound it makes when your molars grind or the lid pops, how it’s arranged on a plate or in a package, what you have to do to get it (ie the “food ritual”, eerily similar to the smoking ritual), the nuances of smell (one chemist explains that he can take a basic cooked beef flavour-scent and layer additional notes on top: grilled, roasted, even barbecued outdoors — entirely in a test tube).

Meta-food issues are also addressed: for example, just like real estate, overeating is location location location. Mice fed tasty treats in a certain location will come to prefer that location, even if they didn’t like it at first. If we were served scrumptious chili cheese dogs in a dirty alley, we’d eventually find ourselves cruising that alley, stepping over garbage as we salivated.

Also interestingly, eaters prefer multisensory experiences. Once, years ago, in the throes of PMS insanity, I assembled and devoured horrid little sandwiches from two potato chips and peanut M&Ms as filling. This “PMS crunch” combo of crispy-crunch + sweet + slightly bitter + fat + salt is no doubt the secret behind the abomination known as chocolate covered pretzels. The more flavours, textures, and stimuli can be jammed in there, the better. Thus, chicken wings are glopped with blue cheese dip (with added sugar); fries are drowned in bacon/cheese/sour cream; double-deep fried nachos are suffocated beneath groaning layers of cheese (from a mix, also sugared), previously frozen and reconstituted avocado, and sour cream that probably contains no actual cream but rather hydrogenated corn or soy oil and emulsifiers.

Foodwise we’re like crazy cat ladies who hoard old shopping bags and bits of string. The more we can jam in there at once, the better. Thus, companies seductively offer us sprinkles, toppings, sauces, cheesy chunks, nummy bits… preferably all gunked into a bucket with a fried egg on top, as per Mr. Creosote’s menu order in Monty Python’s Meaning of Life.

Kessler interviews food scientists, neurobiologists, food industry executives and average people. The food industry exec confesses that companies are well aware of the research — such as the study showing that mice who are normally self-regulating will gorge themselves sick on Froot Loops and other “supermarket foods” — and they use it to their advantage. The food industry, remarks the exec, “is the manipulater of the consumers’ minds and desires.”

Kessler’s thorough explanation creates a damning critique of a deeply cynical industry obsessed with squeezing every last drop of profit out of consumers’ vulnerabilities and cheap commodities. That supersized drink — composed of colouring, water and syrup — you just ordered? 90% profit for the company. Costs them 5 cents to make while you pay $1.59 and think you got a great value.

“Our job,” says one food industry scientist, “was to sell more syrup.”

The worst part, as Kessler observes, is that we often don’t truly enjoy this consumption. The experience is contradictory: we eaters want it, but we don’t.

Even while we’re stuffing our faces, we’re experiencing a kind of artificial hedonism rather than a deep, existential enjoyment. Afterwards, of course, as the stomach cramps roll in like intestinal tsunamis of guilt and we’re left with empty packages, we’re certainly unhappy. As one “average person” remarks about one of her favourite junky snacks, “I do not want them, but I cannot control my desire to eat them.”

Throughout the book, Kessler captures, with a deep compassion as well as medically informed insight, the complex experience of overeating. The real people’s stories ring painfully, heartbreakingly true.

He points out that because of this dysfunctional food environment, the majority of us are actually disordered eaters without having official “eating disorders”. To me, this is a fascinating insight.

Problem drinkers often refuse the label of “alcoholic” because they don’t drink in the morning, or throw up, perhaps. Men who abuse their partners resist the title of “wife beater” because, y’know, it doesn’t happen often, and we were both mad.

Likewise, most of us would not self-label as “disordered eaters”, but that is exactly what we are. Our evolutionary physiology is out of whack with our modern environment. The result is chemical chaos, mismatched stimuli-responses, and a perfectly good body that we understand as messed up. As Kessler demonstrates through numerous examples, our bodies are doing the best jobs they can; it’s just that the tools they have currently suck, and there are agents who, like medieval demons, prey on our (very) soft underbellies.

So what do we do?

Rather, it’s about choosing — and seeking — foods and behaviours that affirm our brain’s chemistry and body’s operational controls while actually nourishing us.

As Kessler also notes, if we are immersed in this environment, we cannot rely on our intuition any more. We cannot always trust our perceptions. We inhabit an environment designed to mess with our reality in all kinds of ways: artificial boobs, electric lights at night, fast-paced work demands, close-up visual tasks, chemical stimulants in the morning and depressants in the evening. The days of the savannah are long behind us.

Kessler argues that “we need to replace chaos with structure”. Our lizard brain can keep on handling our breathing, heartbeat, pooping, and running away from angry dogs, but it’s time to put the recently evolved logical brain in the driver’s seat for most of our experiences. We evolved those food impulses, but we also evolved a very good thinky brain that can solve mathematical equations, produce symphonies, and write TPS reports.

Use that thinky part.

Recognize that we’re being miscued, led astray, and BSed by food companies that mean to do us harm. Recognize that what we feel in the immediate moment may not be “real” or ideal for us. Re-adjust our conception of how much we should be eating — since food companies have rapidly increased the suggested portion sizes beyond the actual mechanical capacities of the human stomach. Recognize, as Kessler suggests, that we are in “food rehab” like any other type of addict. We will inevitably relapse, but we have to get back on the horse.

Don’t feel shame. Feel inspired to action. You can take control, he says. With some self-knowledge and critical thinking, we can all take control back.

And this is not, he concludes, about self-denial. It’s about claiming our evolutionary birthright: food that genuinely replenishes our needs, that tastes truly (not artificially) good, that makes us feel joyful rather than stuffed/guilty/overstimulated, and that works with our body’s chemistry rather than bludgeoning it into whimpering, masticating submission.