Breaker! Breaker! Haul your rig over and we’ll bust some lunges

Truckers have long been perceived as the unhealthiest members of the modern work force: a pill-popping, chain-smoking lot who only unbuckle for a plate of steak and eggs at truck stops.

But a growing number of health nuts have infiltrated the 18-wheeler set. And their bosses – concerned by the added costs and dangers of having unhealthy employees on the road – are encouraging more drivers to follow suit. 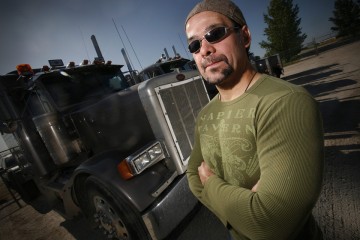 Five days a week, Mr. Beckta fuels up on protein shakes and works out by visiting various gyms along his triangular route from Manitoba down to North Dakota, to Iowa, Ohio and back around through Southern Ontario.

He judges a place not by its scenery, but by the workout facilities he locates by Googling on his laptop.

“Just last week I found one in Wisconsin,” he says. “A small American town, out-of-the-way gym. It wasn’t too bad.”

Mr. Beckta’s zeal for healthy living sets him apart from many of his comrades. But on highways crisscrossing North America, there are others like him.

Some hang punching bags from their cabs. Others trade fast food for portable mini-refrigerators stuffed with tuna and cottage cheese. On any given night, you might find them doing crunches in their bunks, or lunges in the parking lot.

One Canadian driver, who asked not to be identified, says he straps his bike to the back of his rig, and jogs around truck-stop parking lots. His brother has a national gym membership to the YMCA, which he uses in cities coast to coast.