My boy Geoff Girvitz of Bang Fitness is running a fall bootcamp for any of you maggots who can’t wait to drop and give ’em 50.

But don’t worry… it ain’t your momma’s bootcamp. (Although it can be, if she wants to join you.)

“We’re not really your bootcamp type of gym. So why are we prepping to run a bootcamp? Before we answer that question, let’s get on the same page. The term bootcamp crept into fitness circles during the mid to late 1990s with a series of camps run by ex-military personnel. Bootcamps were novel at first – an extremely harsh antidote to the group exercise classes of the time, which included Taebo and Buns of Steel. These classes brought you the unabashed joy of having a drill sergeant (or someone who could pass for one) cuss you out over an hour of intense calisthenics. They worked you with all the subtlety of a meat grinder but they worked you all the same.

For many, the novelty of having a guy like Sergeant Hartman disclose his sincere feelings about you (and the impact of your personal shortcomings on any given round of burpees) wore off quickly. As such, bootcamps began to take their current shape: outdoor fitness classes with a minimum of equipment and perhaps a touch of military-style chique. Now they’re everywhere – at least while the weather is good.

If you know anything about our gym, you’re probably wondering what on earth would motivate us to create a bootcamp. Here’s the thing: we’ve acknowledged that the term bootcamp will be around for a while longer and essentially means a tough morning fitness class. That’s cool because, as far as that definition goes, we’ll be running a bootcamp. However, that’s where the similarities end.

Our bootcamp will be different than most for a few key reasons:

1. We’ll determine your starting point. This doesn’t just mean body composition analysis; it means the highest level of work your capable of performing safely. And if you are not ready for our group classes, we’ll tell you. For better or worse, not everyone is.

2. We’ll customize your training – even within a group class setting. That takes a fair bit of expertise and planning but will allow us to produce appropriate intensity for all members of the class. You don’t have to worry about being the slow kid in the class or being too advanced to get a great workout. We’ve got you covered. Almost anyone at any level should feel equally crushed when we turn up the intensity.”

Here’s more info and the signup. 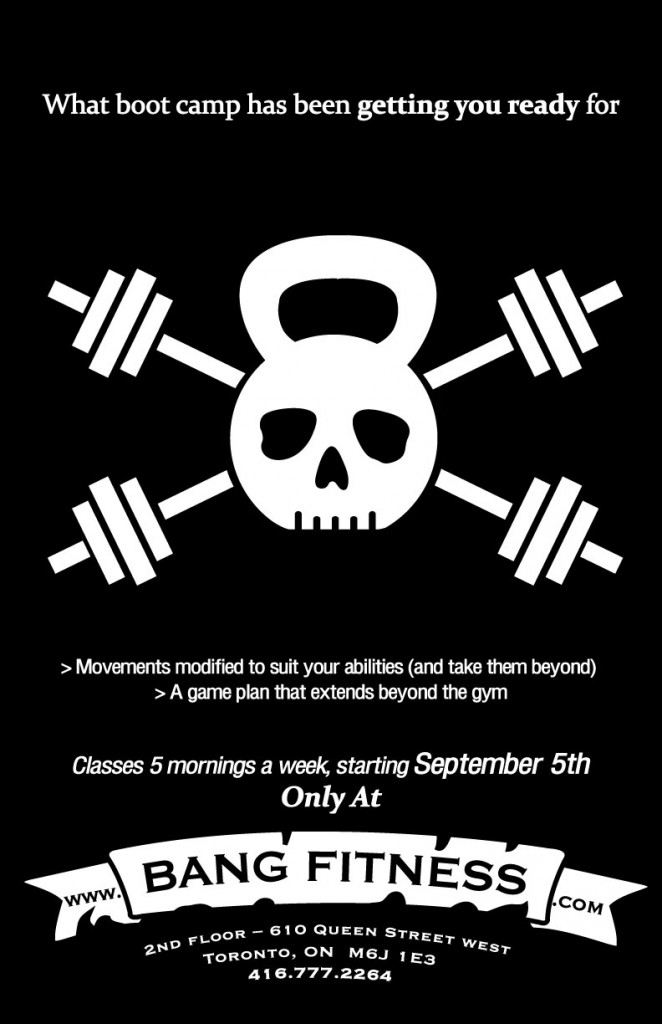