So I’m sitting there in my jammies with a nice cuppa joe on Saturday morning, reading the paper, when I come across this article. It says more young women are getting plastic surgery.

Young white girls are getting their eyes done to look more “catlike”.

Young girls of Asian descent are getting their eyes done to look more white.

And everyone is getting new noses and tits. 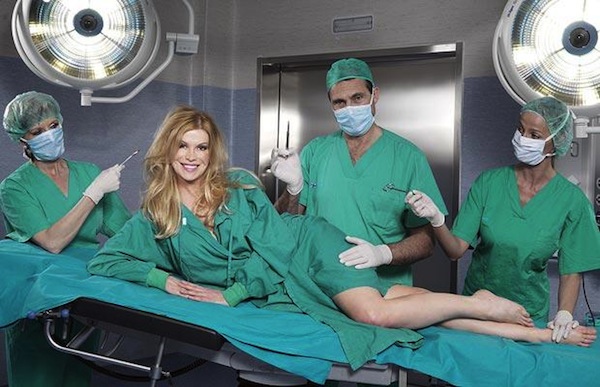 The thing that bothers me about this is not that people are manipulating their bodies. I like the idea of body modification and I’m not bothered by things that are frankly fake. I dream of being a cyborg as I age with all kinds of weird mechanical shit attached to me.

What I object to is the following:

1. That the “you go, girl” message of “shopping and fucking” feminism has a logical conclusion here.

Don’t like your body? Then buy something to change it.

Don’t get messy and talk about how this “choice” feels more like coercion, honey. It’s your choice, choice, glorious choice!! Get out that VISA card!

And we really will find ourselves being more expressive once we have our face frozen with botulism toxin.

I can see the Woman of 2003, lips puffy from collagen and facial muscles paralyzed, on the steps of Parliament now: “As Prime Minister, I vow to mmphf gurgle mumble…”

North American feminists of the 1960s and 70s were all about taking control of our bodies, about talking openly about sexuality, breastfeeding, menstruation, and other body experiences, in an age which tried to deodorize and sanitize their female messiness out of existence. In the year 2002, that control can only be achieved through consumption.

Choice, of course, is a limited one.

In the same way that I could buy any colour of Model T Ford as long as it was black, or that I have a choice between Coke or Pepsi, I can have any kind of surgery I want as long as it conforms to a particular ideal.

What if I visited one of those vaginal surgeons to get some “upgrades”, say, another one (it’s good to have a spare)? Maybe a little extra detailing, racing stripes perhaps, attachments of ambiguous gender origin?

You know, something custom made?

Would there be a surgeon who would do that for me? Unless I had as much coolness and cash as Orlan, probably not.

I should also add that strikingly absent from this entire discussion is the issue of body mutilation that happens without the woman’s consent, in a variety of countries worldwide.

2. That people who should know better are preying on the most vulnerable market of all: teenage girls.

It’s one thing for an adult woman to make the choice to have surgery. It’s another thing for a girl passing through one of the most traumatic times in life to do so.

Sexual harassment and sexual coercion of young women in school, workplace, and personal relationships are well documented. Too few young people have families that are dedicated to their positive nurturance and emotional wellbeing.

Teenage girls are still being taught that they’re the gatekeepers of sexual morality, and that the only will they should care about is someone else’s, either their parents’ or their boyfriends’ (let’s leave baby dykes, bi grrls, and girls who think they might be boys out of this for a moment because as far as mass consumer culture is concerned they’re supposed to be invisible anyway).

Girls who were strong and confident at age 9 are saying, “I don’t know”, “I don’t have any opinions”, and “I feel stupid/ugly/fat” at age 14.

Making these girls a focus group for expensive surgery feels to me like kicking them when they’re down.

I can hear y’all saying, “Gee Krista, you sound, y’know, angry and bitter and all that.” Well fuck yes I’m angry!

People are making money off of other people who are vulnerable, which is pretty much a few steps removed from pimping. Lovely teenage girls (and increasingly, boys) are locking themselves in their bathrooms to puke up dinner and stare in horror at their imagined hideousness.

No doubt many surgeons have qualms about giving breast implants to youngsters, but apparently some don’t.

3. That we hear about how boys are suffering too, so that makes it okay.

Of course they are.

We’re all suffering in this stupid culture that forces girls into one claustrophobic box labeled “Femininity”, and boys into another labeled “Masculinity”.

I’d say girls are worse off in a society which is still patriarchal. But aside from that, it’s not all right to then prey on a new group of victims.

No questions are being asked about the system which fuels the insecurity and self-hatred of young people, why girls are made to feel too fat, unshapely, small-breasted (or large-breasted), bignosed, bad-haired, and undesirable in a myriad of ways; why boys are made to feel too sissy, too pigeon-chested, skinny-legged, chinless, and convinced about their overall lack of Marboro manliness.

And that’s not even beginning to talk about the layers of shame imposed by mass culture on young people of colour, queers, disabled, gender transgressers, etc. etc. etc.

Just because everyone is fucked up to a different degree still does not make it right.

4. The emergence of medical language to describe imaginary “deformities” so that they can then be operated on.

It’s one thing to make a change, like rearranging furniture. It’s another thing to be told one’s natural body is inherently diseased.

Saggy breasts are a “condition” called ptosis. The fat deposits on our hips and thighs are called a “violin deformity”. DEFORMITY! And I won’t even go there about the lines in our faces from speaking, laughing, expressing.

It reminds me a lot of those feminine deodorant spray ads that told us our crotches were swampy, horrible, pungent places where men feared to tread unless they smelled like gardenias (our crotches, not the men).

Oddly enough we don’t hear too much about how men’s bodies are diseased and their features deformed.

We see t-shirts like, “This isn’t a gut, it’s a gas tank for a sex machine!” instead (I actually saw a guy wearing this at my gym last week).

However, see #3. Male insecurities could be an untapped market for “discovering” new physical “pathologies”. Perhaps SSS (Scrotal Sagginess Syndrome, which can be tightened to suggest erectile potential and youthful vigour)? Or Dorsal Gravitational Migration Alopecia (that weird thing where aging male head hair seems to migrate downwards to ears and back)?

So what does this mean for those of us who lift weights, especially since body transformation is a big part of the process?

Well, for one thing, it’s a transformation that I really am in control of. It doesn’t require me give that control to someone else so that they can pronounce my body acceptable.

Second, it shifts my focus about my body.

Sure, I still think about how I look, but how I look is now on my terms. Also, I care a whole lot more about what I can do.

I finish my coffee and look down at my body.

I haven’t shaved my legs for a few days. My toenail polish is peeling.

My breasts, hiding behind the baggy folds of my bathrobe, haven’t seen a C cup since 30 pounds ago. My hands are small with stubby fingers and short nails.

And I smile, because I know that those hands wrapped themselves around a bar, and those legs pulled that bar off the floor. I give my knee an amiable pat.

My body, my friend.

Actually I think the dude on the right is pretty fucking rad. If you’re gonna do something, do it all the way.